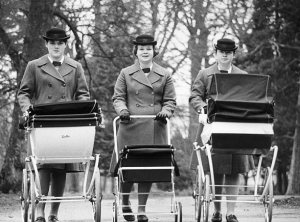 Reflecting on the perennial relevance of using an English public school as a metaphor for the hierarchical framework of British society, David Sherwin, the screenwriter of Lindsay Anderson’s landmark 1968 movie ‘If…’ remarked that ‘the world has always been governed by prefects’; even if one received a state education, the meaning behind his statement is not lost in translation. In a Britain that has been divided and ruled by ex-public schoolboys for almost twenty years, it doesn’t take a great leap of the imagination to see the ghastly superior arrogance of the prefects that attempt to beat Malcolm McDowell’s rebel into conformity being played by Blair, Mandelson, Cameron and Osborne.

In the early 70s, the late great barrister, champion of free speech, writer and ‘Rumpole’ creator John Mortimer engaged in a televised Cambridge Union debate on the subject of pornography, advocating the libertine side of an argument in opposition to the obligatory Mary Whitehouse as well as future Tory leader Michael Howard; Mortimer remembered Howard as insufferably smug and self-satisfied, behaving as though he was already resident on the frontbench in the Commons even before he’d stood for Parliament. In a sense, this was the prefect theory writ large, a young man indoctrinated with the patrician belief that he knows what is best for the rest on account of his being trained to govern those less fortunate than himself, just as his predecessors were trained to govern the colonies.

The argument of the educated elite back then was the same as it always has been – that certain books, images or films are fine for those whose supposedly wide-ranging education has taught them to appreciate things that the lower orders don’t have the intellectual capabilities to appreciate in the same way; should these things be made available to the irresponsible masses, moral depravity can be the only outcome. They cannot be trusted and need to be guided, advised and protected; such an attitude was the motivation for the founding of the British Board of Film Censors in 1912 and continues to dictate government policy where the plebs are concerned, evident in everything from the smoking ban to advice on how many alcoholic units are allowed per day. Those who make the laws clearly cannot be corrupted by the immorality inherent in that which they seek to save the people from. Their education provides them with an intellectual and emotional immunity.

Mervin Griffith-Jones, prosecuting barrister at the Lady Chatterley Trial of 1960, famously asked the jury if DH Lawrence’s long-banned erotic novel was a book ‘you would even wish your wives or servants to read’, a statement that contained within it all the prejudices and sense of superiority that educational privilege can inculcate. After a brief window of just over thirty years in which the country was led by five successive Prime Ministers who weren’t raised in this environment, the ruling elite reverted to type and once again the British public find themselves being talked down to and treated like children by their ‘betters’. It is no coincidence that children are usually evoked when our betters attempt to justify their outrage on our behalf, as though every adult in the country has an innocent little angel handcuffed to their person 24/7, inadvertently exposed to everything we voluntarily expose ourselves to – laws on pornography or smoking or illicit substances must be tightened because of the children. Children are a convenient tool to prick the moral conscience, but why not kittens or puppies?

The news this week that long-overdue renovations to the Palace of Westminster may require a temporary debating chamber has thrown Parliament into disarray due to the fact that the proposed location for this chamber doesn’t allow the consumption of alcohol. Owned by an ‘Islamic company’, drinking there is forbidden, so there would be no bar. A workplace in which alcohol is banned?! Imagine such a thing! How could industry cope if the nation’s workforce were denied the right to booze? After all, the old licensing laws were only introduced in the first place because the government feared the effect of inebriated labourers on the war effort in 1914. The mortified response of Honourable Members to the possibility that they could be deprived of their liquid perks speaks volumes as to their belief that they should be allowed privileges not afforded the rest. Nobody yet knows if the underground rifle-range at Westminster will also be threatened by the imminent refurbishments, but I dread to think how MPs will cope if that too is rendered out of bounds. British steelworkers currently facing redundancy must wonder if their own workplace rifle-ranges are under threat along with their livelihoods.

That ego and the seductive allure of power can induce an even greater feeling of Us and Them amongst politicians who ascend to ministerial heights is something that few dispute; MPs being caught either with their hands in the till or their trousers round their ankles are common side-effects of coming to believe their status enables them to get away with indiscretions ordinary mortals would be punished for – something both the expenses’ scandal and the career of the recently deceased Cecil Parkinson will testify. The current crop of prefects seem to blame the evils of an over-powerful state on an abundance of public services, hence their determination to strip them down to the bones; yet it is the ability of the state to outlaw everything that distinguishes a democracy from an autocracy that is the real evil the public have to contend with when their nanny can infantilise them with unchallenged impunity. They regard you as a lower life form and always will if you let them.

The death of Sir Terry Wogan at the age of 77 is the latest in a series of celebrity deaths that has marked out a year only one month old as a graveyard for famous faces that have been part of the nation’s cultural wallpaper for as long as many of us can remember. Of course, that these names were in the free bus-pass demographic means the Grim Reaper had already rented a property in their neighbourhood, waiting for the call; but though childhood may sometimes still seem within touching distance when we snatch a glance over our shoulders, the fact remains that those of us born in the 1960s or 70s are travelling away from it with the same gathering speed as the stars that illuminated it.

As a child, Radio 2 seemed like Radio 1 for my grandparents; I initially associated it with holidays at their house, when my grandma’s caramel-coloured radio would be tuned-into Jimmy Young playing Doris Day and other 50s mainstays. Later, when even the briefest spin of a hit lumped in with Punk was more than my father could stomach, his in-car radio crossed the no-man’s land between the hairy cornflake and Wogan to infect my ears with contemporary MOR. It was the pre-breakfast TV era, when radio was the exclusive link to the outside world, as it had been for generations, and radio’s role as a means of starting the day has never really left me. Television before the late afternoon still seems wrong.

Whereas Radio 1 DJs wore satin bomber jackets ala Smashie & Nicey, Radio 2 DJs dressed like Val Doonican; there wasn’t actually much of an age gap between them, but at least the Radio 2 crowd didn’t pretend to be younger than they actually were, bar the one concession to middle-aged vanity, the toupee. But it was the voice that mattered more than the look, and Terry Wogan had one of the best, a warm Irish twist on the oral central heating of Oliver Postgate at his most soothing.

At one stage in the 1980s, Wogan was omnipotent to the point of annoyance. He’d presented ‘Blankety Blank’ for years and was then hosting a chat show on primetime BBC1 three nights a week; he presented ‘Children in Need’ every November and narrated the Eurovision Song Contest every spring. He’d only just packed in his long-running morning show on Radio 2, the vehicle that had brought him to the country’s attention, as his workload left him with little room to focus on it. By the turn of the twenty-first century, however, his TV profile had dipped somewhat, washed-up on the barren shores of Channel 5’s daytime schedule; wisely, he’d gone back to basics on Radio 2 and helped establish the station as the nation’s most popular. By this time, past antagonism towards him had softened as it often does with the survivor; those dulcet tones were once again associated with distant mornings in which they had bantered with Jimmy Young, and the Eurovision underwent a similarly nostalgic reappraisal as Wogan’s witty and sardonic commentary made it worth watching.

Wogan finally retired from his daily Radio 2 show in 2009, handing the slot to Chris Evans as part of Radio 2’s occasional facelift when it drops down a generation. He continued to broadcast a weekend show until November last year when health problems also caused him to miss ‘Children in Need’ for the first time. His passing doesn’t end an era anymore than the death of fellow veteran broadcaster Ed Stewart a few weeks ago did, for the era ended long before either hung up their microphones…innit.