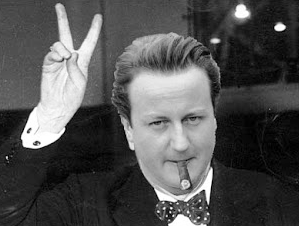 Are you bored yet? I was certainly heading that way last week, when I switched on ‘Newsnight’ and was confronted by the EU as the lead story every single evening. The EU, the EU, the bloody EU. Apparently, nothing else was going on in the world – or perhaps it was a means of arresting dwindling viewing figures for the programme by specialising on one subject five nights running as a canny gimmick. After a week in which David Cameron has done his best Jim Hacker, dashing from one European bigwig to another and emerging before the cameras declaring he’s won a groundbreaking deal for Britain that nobody but him seems to understand, the PM has finally announced the long-overdue date of D-Day, the date when the Great British public have their first opportunity to decide on their European fate since 1975.

Funnily enough, I was bored with it then as well. Okay, I was only seven at the time and I had no interest in the EEC Referendum; I wasn’t Jacob Rees-Mogg. There’d already been two General Elections in the previous 16 months, and I probably thought it was another one of those going on. As long as it came free with a day off school again, that was fine by me. Forty-one years later, I’m not at school anymore (be pretty weird if I was), but my interest in the issue is ironically coloured by similar symptoms to those that characterised my reaction in 1975 – a basic absence of understanding as to the facts. We seem to be awash in a sea of misinformation generated by the two opposing viewpoints, so vehemently opposed that they are attempting to outdo each other in bombarding us with scaremongering.

If we leave the EU, our economy will suffer, companies investing in our workforce will withdraw and the unemployment figures will soar; if we remain in the EU, we will be in a stronger position than ever thanks to Dave’s negotiations and will be in charge of our own destiny as well as benefitting from greater cooperation with our European partners.

If we leave the EU, we will be free to trade with America and the Commonwealth, as well as trading with European nations, without any potential profits being limited by ridiculous directives from bloody Brussels; if we remain in the EU, our elected representatives will continue to have their hands tied by rules and regulations none of us signed up to, hampering the chance of further economic recovery and flooding the country with more immigrants.

There’s already a distinct whiff of testosterone wafting from the respective podiums, less than 24 hours after Cameron fired the opening salvo of the four-month marathon. Farage and Galloway are flexing their muscles, fresh from their one-trick pony gyms and sharing some onstage man-love. The UKIP leader has been waiting for this moment all of his political life; it’s his sole raison d’être; it’s the reason he does what he does – whatever it is the leader of a political party without a seat in Parliament actually does do. This is his one opportunity to grab Olympic Gold. As the manager of a League One team playing a Premier League giant in the FA Cup Quarter Finals would say, this is Farage’s cup final. If he blows it, he’s history. Side-by-side with Gorgeous George, Farage is now in tandem with a man he has more in common with than their ideological differences suggest. Both are classic mavericks and appeal to those sick of the slick Westminster Mafia, both are loved and loathed in equal measure; the fact that this issue has united them has echoes of 1975, when the then-‘out’ campaign contained the likes of both Tony Benn and Enoch Powell.

Also reminiscent of 1975 is that Cameron has decided to follow in Harold Wilson’s footsteps by dispensing with collective responsibility within the Cabinet. Everyone is waiting to hear which way Boris will go, whereas Iain Duncan Smith and Chris Grayling were quick to nail their colours to the ‘out’ mast. Less predictably, Michael Gove has thrown his lot in with the rebels as well. Which Brexit group he’ll ally himself with is less simple, as the ‘out’ campaign appears a tad disorganised at the moment, with more than one group jostling for official recognition as the genuine article – a bit like the IRA, the Real IRA and the Continuity IRA, sort of. The ‘in’ group appear more choreographed, but the prospect of Cameron and Corbyn both advocating essentially the same message is a strange one. Peter Mandelson allying himself with George Osborne makes it easy for critics to label the Dark Lord a closet Tory again, but Jeremy Corbyn?

I think this referendum is going to be a hard sell to the British public, which is probably why the PM has announced the date four months in advance, further in advance than he would with a General Election. He’s got a job on his hands to convince every ‘don’t know’ that this is something that matters to them as much as it matters to him – though his reasons are heavily influenced by the need to ensure his ‘legacy’; after all, he narrowly avoided becoming the Prime Minister who presided over the breakup of the United Kingdom when the Scottish Independence Referendum result came through. He could do with what he regards as another tick against his name. Yes, there are those out there for whom the mere mention of Europe induces the kind of frothing-at-the-mouth, manic mortification most imagine only exists in Daily Mail editorials; but the majority of people in this country have far more pressing concerns, ones that four months of relentless exchanges of fire between the two interested parties across the media won’t make seem any less pressing.

Get ready. We’re in for a long ride. When’s the new series of ‘Poldark’ start, by the way?

6 thoughts on “THE EUROPEAN CANNON IS HERE”