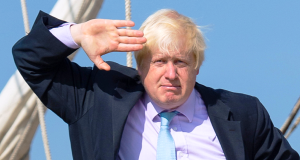 So, Bo-Jo has gone and done it. The darling of the anti-Cameron right has once again highlighted his canny opportunism by coming out and declaring his pro-Brexit stance, thus enhancing his credentials as a potential PM in the eyes of the Sun, Mail and Express when Dave calls it a day – something that may come sooner rather than later if the Great British public goes with the ‘no’ vote. Of course, just as there’s more to Cameron’s pro-EU position than simply wanting to remain attached to mainland Europe, there’s a hell of a lot more to Boris’s public declaration than promoting the referendum we now know will take place on June 23.

Curiously, whilst David Cameron seems to embody all the privately-educated elements that irk those not fortunate enough to enjoy his privileges, the Mayor of London’s background is just as privileged, if not more so; his appearance on ‘Who Do You Think You Are’ revealed he was descended from George II, no less. But whereas Dave comes across as an insincere, vacuous posh boy whose desperate efforts to mix it with the plebs underline his cluelessness, Boris’s bumbling comedy persona and recourse to archaic ‘crikey’-isms unheard since the heyday of Billy Bunter have endeared him to sections of the public who see in him a rare example of a genuine individual where contemporary politics are concerned. In a way, it’s no real surprise that a populace in love with the cosy Neverland of ‘Downton Abbey’, where toffs are benevolent to the lower orders and forelock-tugging servants know their place, should take Boris to their hearts. And he’s no fool, despite his performance before the cameras; he knows this has been his key selling point from day one, and he’s determined to play the part all the way to No.10.

That Boris will now be sharing a platform with those other two professional political mavericks, Nigel Farage and George Galloway, is only fitting. All three have what the likes of George Osborne and Theresa May – the other two main front-runners with their eyes on Dave’s mantle – will never have. Osborne is detested by all but the most devoted Tory and May has the hectoring vocal whine of Mavis from ‘Coronation Street’; neither could be regarded as an odds-on floating vote-winner. Boris not only has the edge over them, but over the two rebels whose team he has joined. Put simply, the crucial difference between Bo-Jo and Farage and Galloway is that the Mayor can actually discern the reins of real power in his sights, a member of the governing party rather representing a minority fringe that can claim column inches and TV spotlights without turning that into sizeable votes.

Johnson’s election as London Mayor back in 2008 confirmed there was more to this man than the clumsy clown who became a household name after hosting ‘Have I Got News For You’ with such chaotic comedic panache. After initially surrendering his Parliamentary seat to run for the capital’s top job, his first move towards regaining a significant foothold within the Conservative Party came when he returned to Westminster in 2015. Despite sharing former membership of the notorious Bullingdon Club with Cameron and Osborne, Boris had a slightly wider education thereafter, working for both the Times and Telegraph before becoming editor of the Spectator for six years. His political career has contained enough scandals to ruin a lesser man, yet he seems to have emerged from both insulting Liverpudlians and engaging in extra-marital affairs a stronger character, his popularity undimmed by unfavourable headlines, which is no small achievement.

If a little forensic examination is applied to his record as London Mayor, it’s evident Johnson has exerted a paucity of good will towards the masses who voted him into office, preferring to cosy up to big business and enabling architects to take a bloody great scalpel to the London skyline with an absence of appreciation for the damage done to it by endless Towers of Babel. Yet, Johnson was re-elected Mayor in 2012, following his consistently high visibility during that summer’s London Olympics, and has regularly utilised his Wooster-ish charisma to his advantage, exploiting a wide-ranging popularity unparalleled amongst his Cabinet colleagues to ascend the next level of the greasy pole. What other politician could get away with quoting Latin in public and not be viewed as a pretentious prat?

Faced with a choice of, say, Michael Fallon or Boris being the star guest on ‘Newsnight’, how many members of the electorate would actively tune in for the first interview, other than those desperately seeking a cure for insomnia? By consciously developing a character in stark contrast with the never-ending parade of Parliamentary dullards spin-doctored within an inch of their lives for fear of putting a foot wrong and inadvertently revealing a flash of personality, Boris Johnson has successfully capitalised on a dearth of colour in Westminster and as a consequence is one of the most recognisable politicians in the country. He learned early on that by obscuring his ambition in affability and eccentricity, he could win over voters who would never warm to a cold fish like Iain Duncan Smith.

Whether the public’s fondness for Boris could be extended to electing him as their leader remains to be seen; but by allying himself with the prevailing anti-EU sentiments dominating discussions over the impending referendum, Bo-Jo has again demonstrated his talent for being in the right place at the right time. And I suspect he’ll do likewise when Dave eventually falls on his sword.