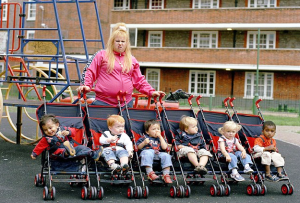 The comment ‘allegedly’ made by prospective PM Andrea Leadsom that she has some sort of moral edge over her Tory leadership rival Theresa May on account of her being a mother and May not being one was quickly rubbished by Leadsom following its appearance in a Times headline; but many women will have understood the sentiments implicit in the comment. There is a particularly smug school of female thought that regards a woman as somehow incomplete if she hasn’t given birth. The woman who hasn’t done so due to biological deficiencies is patronisingly pitied – which won’t make her feel any better – whereas the woman who has deliberately chosen not to populate the planet with offspring is viewed with suspicion and regarded as a virtual social pariah.

There are few cliques more intimidating to a young woman than the motherhood club, especially when those who have recently joined are so vocal in their praise of it. What takes aback those who are unqualified to join is the dramatic alteration in women who previously had a wide range of interests and conversational topics suddenly being reduced to baby bores. They spurn old friendships and instinctively gravitate towards those who share their new solitary passion; and on the odd occasions they find themselves in the company of women outside of the Masonic motherhood, they assume a photo gallery of their beloved sprog is as great a source of fascination to their unfortunate companions as it is to them.

The women’s movement spent decades deconstructing the ancient stereotypes of the female sex, yet the pressures upon today’s women to blend the old roles with new ones in the form of multitasking – career and family, not one or the other – means motherhood cannot be avoided as an issue; even when a career has taken precedence, there is the assumption that a family will still come, albeit a little later than expected.

Pop culture heroines laughingly labelled ‘feminist’ like Bridget Jones have also served to reinforce archaic attitudes, almost as though there was a conspiracy afoot to put women back in their place. Granted, the whole movement did suffer from poor PR for quite a while, giving the impression that all women interested in improving their lot were a bunch of short-haired and humourless butch dykes in dungarees; but an overtly feminine reaction to that misconception was inevitable, and with it came celebrity mothers wearing their children as fashion accessories.

A smart, sexy and witty woman in the public eye such as TV historian Lucy Worsley has had her stated choice not to have children added to her evident eccentricities by a press that still cannot understand a woman who doesn’t have childlessness thrust upon her, but makes that decision of her own volition. Worsley’s response is to claim she has been ‘educated out of the normal reproductive function’ – a shrewd statement worded in a way guaranteed to wind up those who view Worsley’s personal choice as an unnatural affectation. The prevailing belief amongst some is that childlessness, as with death, is something that belongs in the hands of a higher power and not the individual it affects; it should visit without receiving an invitation, and its appearance should always be unwelcome.

Quite how childlessness can be regarded as an impediment to a successful career as a woman MP seems illogical to me. Traditionally, the long hours in Parliament and the late-night debates were always more of a problem for the female faculty at Westminster than the male one; and even though these traditions have been modified in recent years, the workload of any Cabinet MP who has both the business of high office and their constituency to cope with could hardly be helped by also having to fulfil the role of mother, a role which is bound to be rendered part-time. One would imagine not having that additional burden would be an advantage.

Andrea Leadsom’s mother boast, in a similar vein to Sadiq Khan’s ‘my old man’s a bus-driver’ routine, is about as relevant to her bid for the premiership as Sarah Palin’s ‘soccer mom’ cobblers was to her bid for the US Vice-Presidency; by falling back on such clichés, she undermines the efforts of other women in her position to be looked upon as equal to their male colleagues and not to be made a ‘special case’ of. Both she and Theresa May got where they are today without the condescending leg-up of all-women shortlists, so why feel the need to emphasise a specifically female trait? Do male MPs make a big deal about being fathers?

Andrea Leadsom’s comment – one she denied, yet the released recording appears to confirm it – smacks of the inexperience in dealing with the media that the rival Conservative camp are employing as one of many sticks with which to beat her. Granted, there are numerous MPs of many years’ standing who suffer from slip-of-the tongue syndrome – Ken Clarke is a still-active veteran of it; but what should be a positive development, that of two women running for the country’s top job, being currently dominated by an argument over whether or not one contender is more valid than the other simply because she has children is a rather depressing debate of a kind we should have left behind by now. It shouldn’t be a barrier to becoming PM; after all, there was no Mrs Heath for Ted to parade before the press, and her absence didn’t damage his chances.

8 thoughts on “THE MOTHER OF ALL EXPECTATIONS”