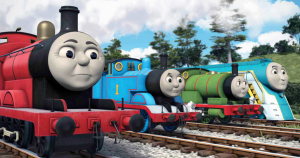 Of all the nationalised industries that underwent privatisation during the great mania for it in the late 80s/early 90s, one in particular appears to be a loss that the majority of the public regret: the railways. No other industry privatised in this period seems to have suffered as much from the worst aspects of privatisation – where profit is all and customers come a poor second. A chronic lack of investment in maintenance at the expense of ensuring shareholders receive their windfalls has characterised private ownership of the railways over the last couple of decades; and seeking the renationalisation of the railways is one Jeremy Corbyn policy that many outside of the Corbyn cult actually support, including the likes of Peter Hitchens.

Following the highly-publicised sales of BT and British Gas in 1984 and 1986 respectively, state-owned companies such as British Airways, the remainder of British Leyland, British Rail Engineering, British Shipbuilders, British Steel, National Express and Rolls-Royce (nationalised by Ted Heath in 1971) were all privatised on Mrs Thatcher’s watch; the regional water companies were privatised in 1989, followed by a hefty increase in tariffs and reduction in investment, foreshadowing the privatisation of British Rail that took place under John Major’s Government between 1994-97. Major’s predecessor’s avaricious foresight proved to be highly profitable for her successor as Prime Minister when the Government’s remaining shares in BT were sold during a further floatation in 1993, transferring a cool £5 billion into the coffers of the Treasury. Five years after the British Gas sale, British Gas Chairman Robert Evans was revealed to have accepted a 66% pay rise, following a 42% rise in pre-tax profits for the company. There was gold in them thar industries, though not where the public were concerned.

Yes, I accept that distance has made it all-too easy to get nostalgic about British Rail and conveniently neglect to remember the dirty great diesel beasts we travelled on as children, with their dubious hygiene and the appalling food that was the source of long-running gags for TV comedians throughout the 70s and into the 80s. The trains themselves have certainly improved a hell of a lot over the past 20 years, though who’s to say they wouldn’t have anyway, with or without privatisation? Where privatisation has left its most shameful mark on the industry is in the astronomical increases in the price of tickets and the abysmal service many of the franchise holders provide for passengers, with the wretched Southern, in charge of trains covering London and the Home Counties, being the worst current example.

According to recently-released statistics, a mere 20% of Southern trains reached their destinations on schedule in the year from March 2015-March 2016. At one time, Southern ran 2,242 weekday services; at the moment, 350 services are being cancelled a day as inept management struggle to maintain a timetable during ongoing battles with unions in a dispute over driver-operated trains. Management say there are unacceptable levels of sick-leave amongst staff, which they regard as striking in disguise – whereas unions say management are making such accusations to obscure the fact they won’t employ enough guards and drivers as they seek to cut costs. But, as ever, the real losers are the commuters being fleeced for the privilege of (not) travelling with a useless franchise holder like Southern.

The partial collapse of a brick-built Victorian bridge in Leicestershire yesterday thankfully occurred at midnight, when the railway track below it wasn’t being used. However, it quickly emerged that a passenger train had travelled underneath the arches just 20 minutes prior to the collapse. Eyewitnesses claim the trouble began not long after the bridge was closed and Network Rail workmen appeared to undertake some drilling. Residents had reported the poor condition of the bridge for years, one side of which was alleged to be sinking, with the cracking brickwork visible to anyone passing over it; but the belated beginning of patched-up repair work sounds like too little too late. The photos that have been released to the press seem to confirm the bridge was in a perilous state, which makes one wonder why action wasn’t taken earlier. No profit in doing so, perhaps.

What happened in Barrow upon Soar in Leicestershire yesterday could effectively happen on any rail network in Britain. It seems symbolic of an industry that is so blinded by the prospect of making money that its archaic infrastructure is criminally neglected. We are rightly proud of the fact we essentially invented a form of travel in this country that revolutionised the time it takes to get from A to B and played its part in making Britain the premier industrial powerhouse on the planet; but so many laurels have been rested on by those entrusted to run the railways since the Golden Age of the nineteenth century that investment and planning for the future have for far too long been regarded as minor concerns, even before privatisation; we were amongst the last countries in Western Europe to finally dispense with steam, for example (as late as 1968). Privatisation merely appears to have exacerbated many of the problems that were already intact prior to 1994-97.

In retrospect, Dr Beeching’s axe in 1963/4 was the short-sighted solution to clipping the wings of a transport system that was viewed as irrelevant when the government’s crystal ball could only foresee travel in the shape of the private car. On a motorway system today clogged-up with the kind of traffic that simply wasn’t anticipated in the 50s and 60s, the railways are more important than ever; and they should be the pride of the nation – accessible, affordable, and in the hands of the people.

PS: This is something I have touched on before, albeit with tongue firmly in cheek…

5 thoughts on “THIS IS THE AGE OF THE GRAVY TRAIN”