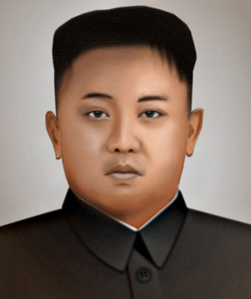 It has to be said – old-school crackpot dictators are a little thinner on the ground than they used to be. Yes, there’s Assad, but as far as psychopaths go he’s rather a weedy-looking runt of a man, short on insane charisma and therefore hardly worthy of comparison to Idi Amin, Ferdinand Marcos or Jean-Bedel Bokassa. Ever since Gaddafi received rough justice at the hands of the Libyan people, nutters in theatrical military dress or ones staging extravagant coronation ceremonies that bankrupted their country appear to be on the wane. And, mad though he may be, Donald Trump is aiming for democratic election as his nation’s leader as opposed to seizing power in a coup. Ah, but there’s still North Korea; and there’s still Kim Jong-un.

Kim Jong-un ticks a fair few of the crackpot dictator boxes, for sure. He’s never seen in anything other than his regulation Mao-style uniform; he has that strangely severe crop with little at the sides or back but plenty on top that was once de rigueur for members of bands clogging up the 80s indie charts; he has an unsettlingly smooth, plastic countenance that Hollywood has-beens would die for; he inherited the physical leadership of North Korea from his late father, who nevertheless remains celestial leader of the country for all eternity; he holds more official titles than he can probably even list; he has presided over numerous purges and executions on a whim, including members of his own family; he is head of an archaic Stalinist regime that controls every aspect of its oppressed subjects’ lives, as though (as Christopher Hitchens once memorably observed) using ‘Nineteen Eighty-Four’ as an instruction manual; he is provocatively antagonistic towards the USA and the West; and he also now has his finger on the nuclear button. Yes, I think he’s worthy of a spot in the pantheon under discussion.

North Korea’s much-publicised nuclear programme has hit the headlines again over the past few days, but it now has an official history that stretches back a decade – according to the not-necessarily reliable PR machine of the ‘Democratic Republic’, at least. A 2006 underground explosion was detected by outside sources, and the North Koreans claimed it was their first nuclear test. Reports that the country was indeed a nuclear power followed over the coming months and years as the alleged underground hydrogen bomb explosions continued to register on monitoring mechanisms way beyond the borders of the secret state that is Kim Jong-un’s private kingdom.

During the Cold War, North Korea allegedly requested assistance in developing nuclear power from both the Soviet Union and China, though only the former gave any kind of help, acting in an advisory capacity to build research reactors from the mid-60s to the late 70s. At the time, North Korea was a pretty minor member of the Communist club, with most of Eastern Europe answerable to Moscow, and China the dominant power behind the so-called Bamboo Curtain when it and the USSR were at odds with each other.

However, in the twenty-first century, the changing landscape of political ideology has pushed North Korea to the forefront of global tensions, with this last obstinate bastion of increasingly isolated designs for life being one of the few remaining countries still basing itself on an outdated model long since discarded by former Soviet satellite states and even China, following its phenomenally successful move into the free market. There is a novelty factor in place today, both in terms of the country itself and its worryingly Loony Tunes leader. North Korea is a curious anachronism in the Global Village, with only the testimony of the few to have escaped its clutches serving as reportage from the forbidden zone.

One unsung area of the North Korean economy has been its export of ballistic missiles, though speaking as an Englishman whose own nation’s booming arms industry is currently profiting from Saudi strikes on Yemen I have no grounds to display superior smugness. Egypt, Libya, Pakistan, Iran and Syria have all benefitted from North Korea’s militaristic hardware, yet the United Nations has still imposed sanctions against the country without any discernible impact upon Kim Jong-un’s oblivious and immune regime. Too-close-for-comfort neighbour South Korea has become understandably jumpy with such an unstable enemy on its doorstep and has been forced to issue details of its plans to obliterate the North Korean capital of Pyongyang if its half-brother extends its nuclear experiments to the point where it can be perceived as a serious threat to its genuinely democratic sibling, claiming Pyongyang will be ‘reduced to ashes and removed from the map.’

Earlier this year, North Korea declared it had sent a satellite into space, provoking condemnation from the US as well as near-neighbour Japan, and even China – traditionally the country’s staunchest ally in the region. China’s support remains crucial to North Korea’s continuing existence as a bonkers rogue nation, and in theory China could bring North Korea to its knees without a single shot being fired. But Beijing is playing a very clever slow game where its Communist kindergarten colleague is concerned and the jury is out on how far it will allow the country to go when China itself is so preoccupied with building bridges in the West and expanding its business interests in Africa.

How much longer China’s attempts at projecting a professional and reformed image whilst supporting an embarrassing throwback like North Korea will last remains to be seen; but if North Korea keeps on generating so much bad publicity, it’s only a matter of time. As for the rest of the world, we can only observe events from afar and hope that the Supreme Leader meets his maker before his evident insanity curtails our own future ambitions.

Anyway, if you require an antidote to that gloomy prognosis, here’s some satire…

2 thoughts on “FULL OF EASTERN PROMISE”