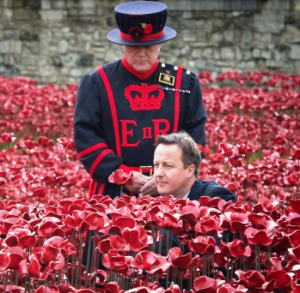 An older guy who was a regular visitor to the residence I shared twenty years ago once returned from the corner shop visibly incensed, having just being lectured by a student beside the samosas on the moral crime he was apparently committing by wearing a poppy. A man whose own father had fought them on the beaches was surprised to be challenged and patronised by a university-educated girl whose opinion that the remembrance poppy endorsed ongoing conflict was one she clearly couldn’t keep to herself. The right to choose whether or not to wear one evidently didn’t come into it; and this seems to be a permanent aspect of the contentious poppy topic on both sides.

With the poppy predictably promoted in characteristically aggressive fashion by the likes of the Mail and the Express as some skewered symbol of patriotism as potent as ‘God Save the Queen’ or Britannia, refusing to play ball obviously places such traitors alongside Lord Haw-Haw. Any public figure appearing on television bereft of a poppy pinned to their lapel is basically pissing on the corpses of our brave boys. They probably voted Remain, are soft on ISIS, and are no doubt gay too, the lefty pinko socialist scumbags. In this case, the poppy is reduced to little more than a badge of reactionary jingoism; and I don’t believe it was ever meant to be that.

The victorious nations who’d fought the First World War adopted the poppy as a mark of respect for their fallen countrymen in the early 20s, following the campaigning of American YWCA volunteer worker Moina Michael, who had been inspired by Canadian Lieutenant Colonel John McCrae’s poem ‘In Flanders Fields’. Production of the artificial remembrance poppy began with Frenchwoman Anna E Guerin, whose poppy-sellers in London caught the attention of Field Marshal Haig; his prominent role with the Royal British Legion ensured the poppy would henceforth be taken up by that organisation and equivalent ones throughout the Commonwealth and North America.

The white poppy is often portrayed as a newfangled pacifist alternative to the traditional red poppy, yet its origins almost stretch back as far as the senior one. Its birth reflected the strong anti-war sentiment of the 30s, when the prospect of being dragged into global conflict again was vehemently opposed by a generation still getting over WWI. The Co-operative Women’s Guild introduced the white poppy in 1933, viewed as a way of remembering the dead without creating the climate for more; even then, some regarded the red poppy as possessing an inherent glorification of military valour, employed as it was by politicians seen as dangerously warmongering, such as Churchill. Critics of the white poppy at the time of its introduction associated it with, at best, lily-livered appeasement and, at worst, the British Union of Fascists. Its divisive symbolism hasn’t really changed much in 80 years, with Mrs Thatcher famously dismissing the white poppy in the 1980s.

Recent military adventures with less black-and-white clarity than the Second World War have seen veterans of previous conflicts claim the poppy is all-too frequently used as a political tool of virtual emotional blackmail, pressurising people into wearing them even if they disagree with British interventions in the likes of Iraq and Afghanistan. This opinion was supported by the last survivor of the First World War, Harry Patch, whose quote ‘War is Organised Murder’, was emblazoned on the outfits worn by these veterans when they laid a wreath of white poppies at the Cenotaph in 2010.

In Northern Ireland, the poppy has an especially incendiary image; worn with pride by Unionists and regarded by Nationalists as glorifying an army they have always viewed as oppressors, the sectarian controversy has even stretched to the sports arena in Scotland, when Celtic (Glasgow’s traditional Catholic giant) took to the field for a match in 2010 with poppies on their shirts. It has even crossed the border with players plying their trade in England. West Bromwich Albion’s James McClean is a Catholic Ulsterman, and his refusal to wear a poppy on his shirt around the time of Remembrance Sunday emanates from his roots in Derry, scene of Bloody Sunday. The online abuse he, and Channel 4 News anchorman Jon Snow, have received for not wearing a poppy in the run-up to November 11 reflects the continuing arguments over choice when it comes to the poppy.

The so-called ‘poppy garden’ surrounding the Tower of London in 2014 was a powerful visual statement on war during the centenary of World War I, yet was utilised as convenient propaganda by David Cameron’s Government at a moment when the Coalition were quietly cutting funding for the Imperial War Museum. Again, any criticisms were cannily shouted down as politicians exploited the response of the public to the display, which seemed a little too close for comfort to the floral excess outside Kensington Gardens following Diana’s death to me. This year, the decision of FIFA to ban the England and Scotland teams wearing poppies on their shirts for the upcoming World Cup qualifier has provoked the kind of outrage from the usual suspects, but it really should be down to the individual if they choose to remember the fallen that way, not a corrupt governing body hardly in a position to lay down the law, nor, it has to be said, a tabloid newspaper.

I personally haven’t worn a poppy since I was a child, but does that make me an Enemy of the People (as the Daily Mail would say)? I don’t think so. Wearing a poppy is optional, not compulsory. If the public have to be told how they have to remember the dead, they’re deserving of the emotional manipulation they receive.

7 thoughts on “TOP OF THE POPPIES”