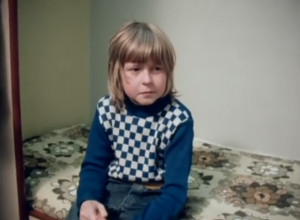 At one time, TV documentaries opened viewers’ eyes to previously-hidden worlds rather than simply reflecting their own prejudices about a particular social demographic back at them. A good example was the award-winning ‘Gale is Dead’ in 1970, which shone an unflattering light on the grim underground subculture of heroin addiction and the tragic demise of an unloved teenage graduate of the children’s home conveyor belt that succumbed to it. Five years later, another programme in a similarly sympathetic vein profiled an eleven-year-old boy from County Durham who was being held at a secure unit for disturbed children on account of him being a prepubescent pyromaniac. Anyone who witnessed the TV debut of Michael ‘Mini’ Cooper would have been instantly aware that here was a remarkably intelligent, sharp, and charismatic young individual that society didn’t know what to do with.

Mini emanated from a working-class background with a God-fearing Irish mother and an archetypal Northern English father who disciplined his children in the way he himself had been disciplined – the parents of Larkin’s ‘This be the Verse’ writ large. His rebellious instincts asserted themselves at an early age, traversing a familiar path of shoplifting and playing truant before settling on the unusual outlet of starting fires; one such fire took place in Mini’s own home which, unbeknownst to him at the time, was occupied by his father. This resulted in him being taken out of a normal school environment and placed in the kind of institution that was a dumping ground for children who kicked against the pricks without knowing why.

Franc Roddam, the director of the 1975 documentary (who later progressed to the likes of ‘Quadrophenia’), had the kind of access to closed-door institutions that would be unimaginable now; he was able to film inside the secure unit Mini was being held at and record the rehabilitation process of the time as it was practiced not just on the programme’s ‘star’, but also the other inmates, whose faces aren’t pixilated. We see the chillingly cold panel that decided Mini’s fate and condemned him to an adolescence under the strictest supervision, keeping him away from the society they regard him as a danger to; and we see the way in which the psychiatric profession used children like Mini as guinea pigs for the latest experimental techniques, without any real care and consideration for how little they would prepare him for release back into the community as an adult.

I first became aware of Mini a decade after his initial television exposure, when the memorable BBC2 documentary strand ‘Forty Minutes’ broadcasted a follow-up film to the 1975 original; in it, we caught up with Mini ten years on, viewing his eleven-year-old self on camera for the first time and struggling to deal with the real world after a lengthy spell being utterly institutionalised by the facsimile society of the care system.

He was making a lonely living as a Butlin’s-style entertainer, performing a magician’s act before bored holiday-makers and trying his best to cope with an environment that the system hadn’t prepared him for. The programme ended on an uncertain note, with the viewer left hoping that Mini would manage to forge a future for himself that would see him finally bury his demons.

We might like to imagine we’ve moved on in the forty-plus years since Mini’s TV debut; but data relating to the children in this country currently being detained whilst another Star Chamber – or ‘Youth Offending Team’ – decides what to do with them suggests not a lot has been learnt in the intervening half-century. There are 10 secure children’s homes in the UK, some of which have held the likes of Mary Bell and the James Bulger killers, Robert Thompson and John Venables. The real problems seem to arise when the children reach 15 and are then eligible to be transferred to a Young Offender Institution. The statistics speak for themselves. Under the old-school Borstal system in the 1930s, the average re-offending rate was around 30%, whereas the modern equivalent is closer to 75%. It doesn’t sound as though its successor is working.

As with the early Nick Broomfield production, ‘Juvenile Liaison Officer’ (made the same year, but deemed too controversial to transmit at the time), the access granted to the director of the original documentary on Mini Cooper – perhaps in an aim to highlight the ‘progressive’ nature of the reformed post-Borstal system – wouldn’t be the same today. Fear of litigation born of this country’s compensation culture and an increasing inclination to cloak so many of our invisible institutions in a veil of secrecy under the guise of security means fewer of us are actually aware of what goes on behind those doors than we were forty years ago.

But these developments imply they have something to hide. The public sector homes don’t wish to expose their management’s inflexible adherence to a rulebook they stick to with fastidious arrogance, regardless of how much damage it might do to those in their care; and the private sector’s natural sense of competition means they don’t want their competitors to take notes when they get it wrong. How can either attitude fill the parents of children in care, let alone society at large, with confidence in the system?

When filmed at eleven, Mini Cooper wasn’t to know he’d eventually be released back into a society he wouldn’t be an active member for years; at that age, each week seems to span a month, and his upset at being informed of the committee’s decision to keep him under lock and key is heartbreaking. His struggles to survive in that society ever since his release hardly suggest the system prepared him for it. He clearly had potential for greatness; that much is evident on-screen. But the fact that society had no defined role for him to slot into, no available means of harnessing his intelligence, is a damning indictment of that society; locking him up until he came of age was a short-term solution leading to a long-term problem.

Thankfully, for Mini Cooper at least, he finally found his niche in life by turning to writing, chronicling his eventful life in the book, ‘Mini and Me’; anyone who has followed his fortunes via the series of follow-up documentaries to the original has been rooting for him all the way, and there is an undeniable pleasure in seeing him succeed at last. But how many Minis didn’t? How many secure unit survivors have been in and out of prison during the same time frame, nabbed as kids and never breaking the cycle, offered nothing more by the system than being another minimum wage drone because rehabilitation as it stands makes the mistake of trying to turn such kids into everything they rebelled against in the first place?