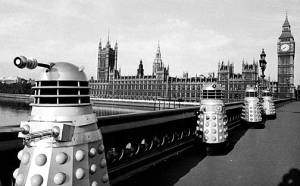 Viewed now almost as an appendage to Parliament, Westminster Bridge was once a tourist attraction for all the right reasons. During the construction of the original in the 1740s, the fact it was only the second major bridge erected in central London since Roman times provoked both excitement and opposition. The latter came from the Thames watermen, whose taxi service ferrying people from one side of the river to the other was perceived to be under threat; for centuries, old London Bridge, that marvellous medieval bottleneck crammed with houses and shops and permanently congested with traffic, had been the sole man-made edifice enabling the Thames to be crossed without the need for hailing a boat.

The sudden appearance of a new bridge was so novel a sight that during one of the periodical winters when the Thames froze over and a frost-fair was held on the river, the incomplete piers of Westminster Bridge served as part of the entertainment as visitors paid to stand atop them for a unique view of the city. This version of Westminster Bridge survived for just over a century before the current model replaced it, but it remains the oldest working bridge still in use in the capital.

Moving on, say the words Westminster Bridge to TV viewers of a certain age and chances are they’ll think of that iconic shot of the Daleks from the 1964 ‘Doctor Who’ story, ‘The Dalek Invasion of Earth’; the Time Lord’s arch-enemies gliding along the bridge with Big Ben behind them seemed to enhance their menace. A Surrey quarry masquerading as an alien landscape was one thing, but the natives of Skaro intruding on home territory convinced children they could turn a corner and run into a Dalek on their own high-street.

Of course, Westminster Bridge has now been added to the annals of infamous London locations on account of events that took place there yesterday, effectively erasing all past associations from the popular imagination. The Daleks are the kind of fantasy embodiment of evil we can understand and be excited by, just as we can Dracula or Darth Vader; but the greatest evil, as always, is harboured within man himself, not the creatures he creates. Patrick McGoohan got that when he revealed Number One in the controversial climax of ‘The Prisoner’ as being Number Six all along.

Any individual who can deliberately drive a car into a random selection of pedestrians and then stab a man to death either because he was wearing a particular uniform or simply because he got in the way inhabits a different league altogether, one that provokes repulsion and bewilderment because it bears so little relation to the evil of fiction that we’ve been familiar with ever since being told the story of the Big Bad Wolf’s encounter with Little Red Riding Hood as children. The real bogeyman isn’t a comfortable caricature, but too close to the realities of the dark side in all of us. Just make sure you get his name right.

Yes, it seems apt, considering the topic of the previous post, that the rush to be first with the facts following yesterday’s incident resulted in a catastrophic faux-pas on the part of ‘cool’ Channel 4 News, which tries so hard to be the ‘Magpie’ to Newsnight’s ‘Blue Peter’. With veteran host Jon Snow at the helm, a man who seeks to combine the broadcasting gravitas of David Dimbleby with the wacky tie wardrobe of Richard Whiteley, ably assisted by both Cathy Newman (a woman whose serious news presenter credentials have often been undermined by the occasional glimpse of stocking-top – check YouTube for evidence) and Krishnan Guru-Murthy (a man whose fat neck seems in constant danger of absorbing his entire head), the programme was caught out as it jumped the gun far too early in the aftermath of the afternoon’s confusion by naming the assailant.

Unfortunately, the man they named – Trevor Brooks AKA Abu Izadeen, a disciple of fellow jail-bird Anjem Choudary – happens to be serving a prison sentence at the moment and therefore couldn’t have been behind the wheel on Westminster Bridge. But he’s a fat ‘coloured’ bloke with a big beard, so the cock-up is understandable, eh? Sacrificing fact-checking and journalistic integrity in order to be first off the blocks in the perennial battle with Sky and the Beeb, Channel 4 News blew it big time and became a Twitter laughing-stock last night, even removing the offending section from the sixty-minute delay of the Channel 4 +1 service so their glaring error couldn’t be watched again. But the damage was already done.

As expected, the trickle of misinformation that occupied the hours following yesterday’s events was eventually superseded by a clearer picture of what happened and who was actually involved. The dead have been named, as has the perpetrator of the incident, and his name isn’t either Trevor Brooks or Abu Izadeen, surprisingly. It should serve as a warning to rolling news channels and all media outlets that deal with the news to make sure they get their facts right before broadcasting them, though I doubt they’ll take heed of the warning; the competition is too intense and the self-inflicted pressure to get a scoop to the public before the competitors do so precludes any old-school attention to detail.

6 thoughts on “A BRIDGE TOO FAR”