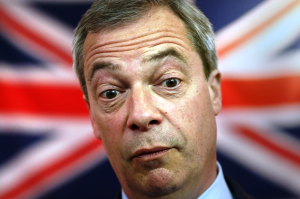 Well, exactly one year ago today we were all about to wake up to the news that a majority of the Great British Public had voted to leave the European Union. At the time, this blog showcased a variety of views pre-vote, and I welcomed them all into what I hoped would be perceived as a healthy forum for the great debate of our times. Twelve months on, the subject remains on the tip of that same public’s tongue, though the phrase ‘Brexit’ has become so ubiquitous that I have to admit I’m pretty sick of it. The General Election of just over a fortnight ago was called in order that Theresa May could strengthen her position when it came to orchestrating the actual physical withdrawal from the EU, and the inconclusive result of that campaign speaks volumes as to how divisive the issue has remained ever since June 23/24 last year.

For all Nigel Farage’s understandable euphoria when he saw his life’s work finally succeed, Britain’s ‘Independence Day’ didn’t necessarily mean everything changed in the space of 24 hours. We’ve had a year to get used to the result, though it’s only been in the past week that a Minister from the UK Parliament has actually sat down with the Brussels mandarins and begun negotiations; we’ve still got two years of this to look forward to. The result was more or less as close as the result of the Scottish Independence Referendum of 2014 and the reaction of many whose vote wasn’t on the winning side has been similarly ill-tempered and emitting a distinctly malodorous odour of sour grapes.

A rash of hissy-fit protests in the wake of the vote and then the emergence of figures such as Gina Miller have served to intensify divisions that even led to a tediously-vocal audience member being ejected from the ‘Question Time’ audience last Thursday. If the EU Referendum exposed divisions in the UK that had been fermenting for decades, the General Election has simply reinforced them.

The glaring divide between young and old on this issue has been simplified in characteristic tabloid fashion both in the actual tabloids and on television, though the divisions distinguishing the metropolitan mafia of Westminster bigwigs and media commentators from those residing outside of the self-contained M25 bubble are more prescient. A lazy assumption that to vote Leave was somehow the exclusive province of Britain First-supporting white working-class bigots or racist pensioners is typical of numerous distortions propagated over the past year; in reality, many British-born Asians voted Leave, some doing so because they believed Britain’s traditional loyalties lie with the Commonwealth rather than Eastern Europe.

A year on, many who didn’t pick the winning horse (not all of whom belonged to any ‘elite’) have accepted the result with good grace and are grown-up enough to acknowledge that a democratic vote doesn’t always side with the way you yourself voted; some, however, cling to the slim hope that the will of the people can somehow be overturned and what they regard as common sense will prevail in the end. These dissenting voices stretch from Europhile Tory grandees like Clarke and Heseltine to the aforementioned Miller and the conscience-stricken Christian Lib Dem ex-leader Tim Farron. Their determination that a so-called ‘Soft Brexit’ will preserve membership of the Single Market and Customs Union, therefore enabling free movement of labour to continue, flies in the face of the immigration issue that was so pivotal to the Leave vote in the first place; but as much as their argument effectively negates the actual result, any ‘Hard Brexit’ strategy has been trashed by the failure of Theresa May to achieve a majority in the Commons.

The problem with Brexit as far as most people are concerned is that they still don’t know what it fully entails; the simplistic Remain/Leave option on the ballot paper a year ago has become so ambiguous and open to so many interpretations in the last twelve months that it has allowed both sides to fill in the blank spaces with their own notions of what it should mean. It’ll take another couple of years before the full ramifications of the decision that claimed the head of a serving Prime Minister (and May well claim the head of another) are fully understood, and by then who knows what this country will resemble? As a means of healing divisions, Brexit remains an unconvincing Superglue. 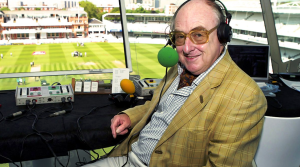 There’s something about cricket that lends itself to a certain kind of voice. John Arlott, Johnners, Jim Laker, Fred Trueman, Richie Benaud, and Henry Blofeld – none of these great gentlemen could have commentated on football or rugby league, for example. The fast-paced nature of both those sports was suited to immortal voices belonging to the likes of Brian Moore or Eddie Waring – the former able to capture goalmouth action with such a memorable level of fevered excitement that it ensured Jim Montgomery’s miraculous save from Peter Lorimer in the ’73 Cup Final would be incomplete without him; and the latter perfectly complementing what was once a gritty, grubby sport played on cold, muddy pitches with a bullish northern delivery that was never better expressed than when Wakefield Trinity’s Don Fox missed a penalty kick in the dying seconds of the ’68 Challenge Cup Final that handed the cup to Leeds – ‘eeh, the poor lad’.

Cricket, with its often soporific interludes and evocation of quintessential English summer serenity, requires a different kind of commentary, and with all of its past poets now gone, ‘Blowers’ was one of the last of the old school still elucidating at will on long-wave. Alas, no more. Blofeld has announced his retirement from ‘Test Match Special’ with the end of the current cricket season in September. His diction is pure pre-war and why not? Estuary English has no place in cricket and it remains one of the lingering bastions of unfashionable pronunciation that is allowed because it implies a certain eccentricity in the context of a sport that, certainly at county and Test Match level, refuses to adhere to the hyper pace of modern life. And even if you don’t like cricket, it’s hard to deny such a rare precious anachronism in the twenty-first century must be embraced.

Blofeld, whose father was at school with Ian Fleming and therefore no doubt provided the surname for James Bond’s nemesis, has been a fixture of radio’s most mellifluous sports broadcast since 1974 and it’s as hard to imagine TMS without him as it once was to imagine it without his illustrious predecessors and one-time fellow commentators. It turns out he’s ‘only’ 77; I imagined him to be closer to 100, but maybe that’s merely due to the voice, which betrays an admirable immunity to healthy living as recommended by government guidelines. But it will go on. As will he – one hopes. England needs him.

2 thoughts on “THE YEAR OF INDECISION”