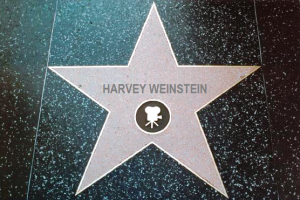 It’s less than two years since the Oscars Ceremony presented Lady GaGa’s ‘Victims Symphony’, complete with a chorus line of Survivors™ resplendent in concentration camp chic to tastefully hammer home the metaphor; and it’s less than a year since the Golden Globes provided a platform for Meryl Streep to play Meryl Streep by condemning the new tenant of the White House without naming him in a histrionic speech that ticked all the liberal Hollywood boxes. Last autumn, the red carpet residents sided with a woman complicit in covering-up her husband’s innumerable infidelities and opposed the election of a man caught on tape bragging about ‘pussy’ like a teenage boy who’d never been laid. And all the time, they were aware that one of their own was apparently even worse, but said nothing. Dame Meryl had even called him ‘God’.

If Meryl Streep’s least appealing role is Meryl Streep, nobody quite does Emma Thompson as a simpering-faced identity politician like Emma Thompson; she’s been at it this weekend in a video saturating social media, adding her wise-after-the-event voice to the sudden stampede to name and shame Harvey Weinstein now that it’s okay to do so. Perhaps the Tinsel Town elite are falling over each other to damn the deposed mogul because his supposedly sleazy activities have reminded the wider world that, for all the PC makeover it has received in recent years, Hollywood is – and always has been – a grubby little corner of California where glorified pimps like Weinstein have free rein to live out their Playboy Mansion fantasies safe in the knowledge that the biz will indulge them as long as the box-office is booming.

I doubt anyone outside of the Hollywood bubble was really surprised at the revelations that have erupted this past week; maybe the only real surprise has been the sheer number of allegations. They only usually happen here if the accused is already six feet under, though the Met must be rubbing its hands together at the thought of being involved in allegations concerning someone in the entertainment firmament who isn’t on his deathbed or dead already. But it’s not as though what Weinstein has apparently gotten away with throughout his career as a leading producer has no precedence in his seedy neck of the woods.

The casting couch has been a permanent part of the furniture in the American movie business since the silents; Marilyn Monroe allegedly expressed that achieving stardom might hopefully mean that she wouldn’t have to suck anymore cocks. Fat, rich powerful men abusing and exploiting wide-eyed wannabe starlets fresh off the Greyhound Bus from Hicksville is a loathsome tradition woven into the foundations of the industry. Indeed, the only voices we aren’t hearing at the moment are those of the actresses who got where they are because they submitted to Weinstein’s advances.

Lest we forget, however, all we have so far are allegations and accusations, yet it’s testament to the times in which we live that Weinstein has been hung, drawn and quartered before any of this has reached a courtroom; mind you, it happened to Bill Cosby quick enough, so Weinstein knew what to expect when disowned by family, friends and the industry in record time. The fate awaiting Dirk Bogarde’s character in ‘Victim’ springs to mind; when his successful early 60s lawyer is threatened with the public exposure of his relationship with another man, he warns his wife that her intention to stand by him no matter what will result in utter social exclusion and the cold shoulders of friends and associates fearful of being tarred by the scandal.

Just as a virtual ‘conspiracy of silence’ appears to have enabled Weinstein to maintain his dubious lifestyle, the post-outing consensus has been set with remarkable speed. Fashion queen Donna Karan made the mistake of publicly contradicting the sudden about-turn and was forced to issue a hasty apology when swamped by a viciously hostile online reaction which only just stopped short of a mass bonfire of the designer gear Hollywood has clad itself in for decades. James Corden, a man whose comedic talents continue to elude anyone with a sense of humour, has also taken the Karan route of begging forgiveness to salvage his mystifying career following his ill-timed jokes on the subject. Saying nothing was the rule until a week or so ago; now if anything is said at all, it has to constitute absolute condemnation.

The difficulty for those not required to rush to judgement is that, having been subjected to multiple scandals of this nature over the past half-decade, every sensational addition to the roll-call of ‘hiding in plain sight’ villains inspires instant scepticism in some and utter conviction as to the guilt of the accused in others; we’ve had so many that it’s hard not to fall into a default mode. The pattern is so established now that being bombarded by the latest chapter in this thoroughly modern saga inevitably leads one to react in the same way as one reacted last time round.

As tends to be the case, initial accusations of impropriety swiftly move on to more serious allegations of rape, and one wonders how long it will take before Weinstein is accused of murdering one of the women he supposedly assaulted, let alone being a member of a Beverly Hills Satanic set indulging in ritual abuse and murder. Actually, Alex Jones is probably already bursting his lungs airing that theory on YouTube, thinking about it. The script is becoming as repetitive and predictable as the ones that make up most of the slurry the US film industry churns out these days; but it’s box-office dynamite, and that’s the currency of the movies. Hollywood, we have a franchise.