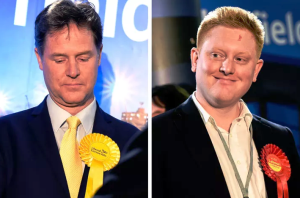 The title says it all, really; that’s more or less the best thing that can be said about Jared O’Mara, Labour MP for Sheffield Hallam. Not a great accolade, is it? It’s a bit like when Crazy Frog kept Coldplay from the No.1 spot in 2005 – ‘Yeah, it’s the biggest load of crap ever. But at least it’s not Coldplay.’ Mr O’Mara, who resembles Ed Sheeran in the guise of an apprentice butcher, has been forced to quit the Women and Equalities Committee over comments that emerged via the site of veteran Alt Right agent-provocateur Guido Fawkes. These comments were made thirteen years ago, when O’Mara was 23.

According to the dramatic revelations, the contentious comments were made on a music website called Drowned in Sound way back in 2004. The young O’Mara apparently said Jamie Cullum should be ‘sodomised with his own piano’ and forgotten ‘Pop Idol’ winner Michelle McManus only won ‘because she was fat’. Pretty puerile stuff that anyone familiar with certain online discourse will recognise, though the comment about the pseudo-Jazz dullard wouldn’t have been that out-of-place in a Charlie Brooker column from the same era, to be honest; and probably not a million miles from the kind of things I would’ve said about a few early 90s pop stars when I was the same age myself. Even his desire for an orgy with Girls Aloud can, I suppose, be compared to similarly licentious thoughts the likes of Kylie, Betty Boo and Cathy Dennis provoked in me at 23.

There’s a big difference between me in 1991 and Jared O’Mara in 2004, however, and that’s the fact my 23-year-old spleen-venting was done in private, bereft of a platform that lives forever out there in cyberspace. Also, I’m not seeking a career in public office, something that surely would necessitate a comprehensive spring-clean of past online comments that contradict contemporary mores. One would imagine that would have been a top priority of O’Mara’s campaign team, though there’s the strong possibility he’d completely forgotten even saying what he said thirteen years ago. After all, how many times have we each been presented with photographic evidence of our participation in a dim ‘n’ distant event and have struggled to recall even being there? But, again, none of us are running for public office, a post in which the past has a habit of coming back to haunt you.

Perhaps it’s especially damaging for a figure such as Jared O’Mara in that he, like many of his party colleagues, is surfing on a social justice wave that embraces ‘diversity’; as if to emphasise this, he was elected in June courtesy of a large student vote that ousted the aforementioned Mr Clegg, a man viewed as a traitor by adolescent academics for failing to keep promises made in their favour. Therefore, when his juvenile grumblings about entertainers with no relevance to 2017 were suddenly leaked to the media, it looked worse for him than it would for an opponent on the blue benches; people expect unpleasant skeletons to be excavated from the Tory closet, but Labour politicians have a habit of selling themselves as a spotless brand of PC MP, particularly under Jezza. I guess that makes it all the funnier when one of them is exposed as less than perfect, especially when they’re a member of a Commons committee designed to eradicate the kind of opinions O’Mara expressed.

Whilst O’Mara should be cut a little slack for making gormless comments on the kind of forum that is usually abundant in them – and for making them quite a long time ago (which 23 is when you’re 36) – his cause hasn’t been helped by a further Fawkes revelation that the MP used such antiquated terms as ‘poofters’ and ‘fudge-packers’ on another site a couple of years before his Drowned in Sound outburst. None of this plays well in O’Mara’s current role; having to answer to a collective known as LGBT Labour, whose motto may well be ‘We are not amused’, means O’Mara’s neglect re erasing his previous online existence has led to the classic humbling apology.

The predictable backlash had included a ticking-off from the LGBT Labour lot (referencing O’Mara’s comments by the snappy label of ‘historical homophobia’) as well as accusations from a constituent that her MP had directed ‘abusive and sexist language’ towards her; O’Mara even has the fun-packed prospect of a meeting with Stella Creasy and her Phil Oakey-gone-wrong haircut to look forward to. The Labour leadership took a leaf out of the Tony Blackburn book of after-the-event insults by calling O’Mara’s comments ‘horrendous’ and ‘vile’, though hasn’t suspended O’Mara from the Parliamentary Party in the wake of his apology; it’s not as if he made disparaging comments about Jews, anyway; and as we know, Labour takes anti-Semitism seriously.

In the wake of the fuss, O’Mara addressed a meeting of his colleagues and bent over backwards for forgiveness, echoing his sentiments in the statement he issued on Twitter. In turn, Labour has done its best to sweep the kerfuffle under the carpet in record time, even going so far as to serve up O’Mara’s maiden speech as proof of what a changed man he is. The only real problem with doing so is that O’Mara hasn’t actually made that maiden speech yet; give him time, though.

It’s less than a week since another Labour MP, Clive Lewis, had to apologise for a video featuring his ‘offensive and unacceptable’ language at a fringe event during the Labour Party Conference; his ‘Get down on your knees, bitch’ moment was again brought to us by Mr Fawkes (is there a pattern emerging here?) and received greater condemnation from his peers than Jared O’Mara has so far managed – even a Tweet from the Grande Dame of PC Labour, Harriet Harperson. None of these dumb and dumber comments would really inspire much more than a shoulder-shrugging ‘what a dickhead’ observation from most of us; but preserving the illusion of Labour MPs as residents of a moral plateau that Tories are barred from is essential to the image the party believes will win them power next time round. Perish the thought there might be a few Holier-than-Thou hypocrites in the ranks.

7 thoughts on “AT LEAST HE’S NOT NICK CLEGG”