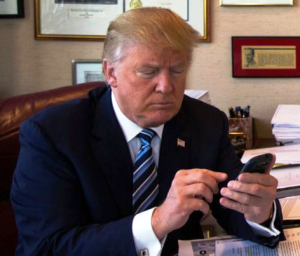 ‘Meh’ was once the term particularly prevalent on social media five or six years back (could be more – who cares?) that was intended to verbalise a shrug of the shoulders and condense ‘I couldn’t give a f**k’ into one short, sharp shock of a statement. I never thought I’d miss a word so characteristic of this rotten century’s habit of shortening the English language into an endless sequence of edited sound-bites; but ‘meh’ seems so apt when it comes to the last 48 hours. Prince Harry getting engaged – meh; Donald Trump tweeting Britain First videos – meh. There are people I know who are having to deal with serious issues considerably more significant than ‘the spare’ getting hitched to the whitest mixed-race divorcee on the market or the President of the USA presenting virtue-signalling MPs with another opportunity to denounce him as the reincarnation of Hitler.

Prince Harry, the Hooray Henry of disputable parentage and the Margaret to William’s Elizabeth, spent his youth cutting a ginger swathe through the tabloids either in the altogether or wearing a Swastika, and then redeemed his reputation in the eyes of those who give a shit by playing the soldier for Granny & Country before embarking upon the tried-and-tested route of doing something charitable for ‘Our Boys’ to show he wasn’t just another upgrade of self-indulgent Hanoverian excess in the absence of something to do. By announcing his engagement to a glorified Kardashian, Harry has gifted Fleet Street with one more reason to recycle the same tired old clichés anew in its never-ending Windsor propaganda programme for a nation that wouldn’t be remotely interested were it not for BBC1 and ITV plugging this nauseating shit on a loop as some form of superficial panacea for the people while they struggle to make ends meet.

With Meghan Markle being American, it was only a matter of excruciating seconds before the spectre of Wallis Simpson infiltrated the coverage, though it should be noted that Mrs Simpson was having it off with a man poised to become King and Emperor in an age in which both Catholics and divorcees were barred from ascending to consort status. Harry is currently fifth in line to the throne and will drop another place come the birth of the third sprog to emerge from the marriage of William and Kate, scheduled to be born on the front page of the Daily Express next spring. It’s not exactly a constitutional crisis, is it?

As for Meghan Markle’s countryman ensconced in the White House, this has been a week in which Mr President has given the left in this country one more open goal they’ve made the most of. His ill-advised re-tweets of gruesome videos posted by Britain First have led to renewed calls to withdraw the invite for a state visit that Theresa May made with uncomfortable haste in the wake of his victory in the US Presidential Election last year. The Donald’s Twitter adventures were a source of both entertainment and outrage even before he ascended to the pinnacle of power, but the hounds unleashed by his latest social media faux-pas have certainly sparked some delicious holier-than-thou hypocrisy in the Commons this week.

A few Tories such as Sajid Javid have broadcast their reactions, whereas Labour MP Naz Shah – a woman so thick and quick to virtue-signal that she re-tweeted a mischievous comment by the fake Owen Jones without pausing to notice his surname was spelt differently – has added her voice to the Trump condemnation by agreeing with a veteran backbencher from her own party that the President should be charged with ‘Hate Crime’. The usual Labour suspects such as ‘Celebrity Mastermind’ dummy David Lammy and Emily ‘Lady Nugee’ Thornberry have lined-up to wear their mortification as T-shirts, and Chris Bryant reminded the electorate he’s still alive by accusing Trump of ‘inciting religious hatred’ – sorry, but are we living in Cromwell’s Commonwealth? Blasphemy laws should have been blown to smithereens with the Gunpowder Plot. They have no place in the twenty-first century, regardless of how Islam has been ring-fenced as a special case above and beyond any criticism, thus sending those unable to express reservations into the arms of illiterate rabble-rousers like Britain First.

Theresa May has added her voice to the condemnation and provoked a defensive response from Trump himself; the PM’s scripted stance has earned her support amongst Trump’s opponents in the US, including a rather worrying Tweet from Senator Orrin Hatch of Utah (no, me neither), who declared the PM was ‘one of the great world leaders’ and proclaimed he has ‘incredible love and respect for her and the way she leads the United Kingdom, especially in the face of turbulence’. Is that the turbulence of Brexit, the turbulence caused by her own unruly Cabinet, or ‘the destructive Radical Islamic Terrorism that is taking place within the United Kingdom’ that the President spoke of following Mrs May’s criticism of him, I wonder?

Donald Trump is too dim and full of himself to avoid walking into these PR disasters, yet those who are on a permanent vigil to rip him to shreds whenever he puts his foot in it again, and are anticipating being showered in plaudits for doing so, are no better – the same self-serving, egotistical wankers whose desperate cries for attention mean no more to me than Prince Harry’s nuptials. F**k the lot of ‘em.

5 thoughts on “AM I BOVVERED?”