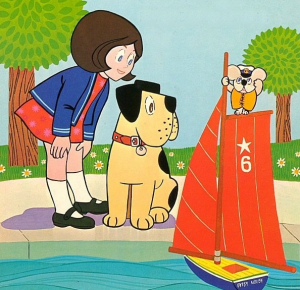 Aged three, I guess the saddest sentence in the English language for me was ‘It’s time for Andy Pandy to wave goodbye now’; it was infancy’s equivalent of ‘I’ve met someone else’, though at least the end-of-the-world dejection was diluted by the promise of a return visit to Andy’s place the following week: ‘But he’s coming again soon.’ And he did, as did all of the inhabitants of television’s toy-box, despite the fact I had no say over my rationed encounters with them. They were my friends before I had real friends, and I regularly indulge in pre-school reunions now that I’m no longer dependent on broadcasters to determine when I can see them again.

As much as I loved the characters when a member of the target demographic, I also loved the worlds they lived in – worlds that seemed familiar, but not quite. Mary, Mungo & Midge may have resided in a 60s tower block, but it was one of those ‘moonbase’ 60s tower blocks as they looked on the architect’s drawing-board before being built – sleek, space-age, analogue erections surrounded by green and pleasant land, as though these buildings had sprouted from the soil like beautiful, synthetic mushrooms; it was a modernist marriage of architecture and nature that never happened, a future that failed to arrive.

The wider townscape of this tower block’s location was a similarly simplistic palette of pulsating primary colours, presenting an idyllic urban environment on a par with those illustrated in the Ladybird books of the era. If a child had designed this imaginary garden city, I wouldn’t have been surprised; ditto Festive Road, address of Mr Benn, or Trumpton. When young children portray their surroundings in the galleries that decorate classrooms, their impressions generally stick to an endearingly primitive template that bears little resemblance to the actual surroundings their parents would recognise as home. Yet, chances are these parents would have depicted the world in an identical fashion when the same age, the age in which the visual is still the senior partner to the verbal where self-expression is concerned. At what point do we cease to see the world through our original eyes? And why, by the time we are in a position to shape that world, are the end results are so bloody ugly?

It was exquisite timing that the shows my generation watched with mother were all produced at the back-end of the 60s and beginning of the 70s; the creations of Oliver Postgate, Gordon Murray, John Ryan and David McKee belonged to a brief moment of English pop culture in which a child’s vision of the world was transplanted from the infant interior to the adult exterior. Amazing footage of the Technicolor boutiques lining the King’s Road from this period bear it out; the lysergic Alice in Wonderland vibe of the shops spills out of the child’s enchanting imagination and onto a grownup monochrome pavement in a way that gleefully contradicts the accepted narrative of maturity; the wares on display also have a childlike charm that adults usually lose and rarely recover.

There’s a distinct difference between childlike and childish, however. The former is the retention of an optimistic, prepubescent perspective on aesthetics that can sit comfortably alongside more advanced attitudes to topics the prepubescent mind struggles with. By contrast, the latter is a thumb-sucking rejection of the childlike, a voluntary regression into the facsimile womb of so-called ‘kidulthood’, a onesie-clad Neverland that refuses to progress beyond the safe space of its own emotionally-retarded playground and responds to any incursion of the adult world with tears and tantrums. Childlike can be compatible with ‘grownup’; childish is wilfully negative and has little connection with the genuine child that is always desperate to be older than it actually is; the genuine child is forever looking forward to a world it has already designed in an imagination bursting with brilliantly bonkers ideas, inventing an exciting adult landscape that is uniquely childlike in its conception.

I have friends whose homes are an Aladdin’s Cave of delightful kitsch and individual eccentricities, decorated with broken old toys and other ornaments with the sole function of raising a smile. But these friends are not intellectual imbeciles; they have merely achieved an admirable equilibrium between child and adult that blends the best of both worlds to form a better one. When governments award multimillion-pound contracts to private companies to take charge of our environment and its institutions, the only beneficiaries are those involved in the transaction. I know if my aforementioned friends were awarded such a contract, we’d all benefit; they’d not only do it for free but they’d transform neighbourhoods so they resembled Pepperland before the Blue Meanies got their hands on it. Most five-year-olds would do the same; their 35-year-old selves, on the other hand, designed what we’re lumbered with.

A childlike side can be a potent aesthetic weapon worth utilising and I only wish more of those who design and construct our surroundings did. Perhaps then the look of our schools, workplaces, homes, hospitals and streets wouldn’t instil such depression whenever we have cause to be there. Our environment acts as a mirror; we see grey, we feel grey; we see ugly, we feel ugly – ulcers begat ulcers. There’s not much knife-crime in Chipping Norton, I’ll wager. Lest we forget, Oscar Wilde’s response when asked in the US why American society was prone to violence was ‘Because your wallpaper is so terrible’. Think about it.

The system drills the childlike out of most children and the adult that emerges as a fully-processed sausage at the end of the conveyor belt has been remade and remodelled to live by an approved script of league tables, life insurance, pension schemes, profit margins, mortgages, and an absolute absence of imagination. He has nostalgic moments of wistful remembrance, recalling his five-year-old self; but his education has taught him he cannot connect with that child and he consequently believes him to be irretrievable. He isn’t, though it depends how far one has been absorbed into the system or how much one has become one’s mother or father without putting up a fight.

Trying not to entirely lose the view of the world when seen through the wide eyes of a child isn’t easy and it is true that some circumstances are more conducive to it than others. Similarly, there is always the temptation to cling to the childlike simply as a refuge to flee into the comforting embrace of whenever headlines overwhelm and enrage. But it can be salvaged; it needs to be. I’ve resisted evoking the Jesuit motto, ‘Give me a child until he is seven and I will give you the man’, but it’s a saying that retains its relevance if turned round: ‘Give me the man and I will give you a child of seven’. He’s still there in all of us, and he still has a lot to offer. Don’t ignore him. I am he as you are he as you are me – and we are all together.

7 thoughts on “THE EYES OF A CHILD”