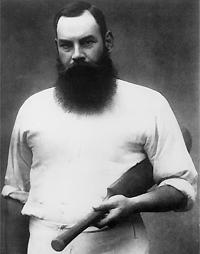 Every politician who ascends to the ultimate seat of power seeks to impose their own values and ideas upon the premiership, and though all talk the talk when taking office, few actually have the genuine vision and skill to make real their radical proposals. Peter the Great, Tsar of Russia from 1682-1725, was one of the legendary historical rulers whose ambition was largely realised, especially the cultural revolution he recognised as necessary if his vast lumbering empire was to be dragged out of the middle ages. Influenced by his tour of Western Europe and exposure to Enlightenment thinking, he returned home determined to instigate change. But along with all the political, social and scientific overhauls, there were more instantly noticeable aesthetic alterations; he had taken note of European style, particularly how all the leading figures he was introduced to were clean-shaven.

Imposing heavy taxes on the wearers of beards in Peter the Great’s Russia is perhaps one of the more seemingly trivial changes introduced by this reforming Romanov; but he saw the removal of hardcore facial hair – a long-standing tradition in Russia – as key to his country moving closer to the great nations of Europe by presenting its ruling class as indistinguishable from the French, Austrian or English. A century later, the Prussian hero of Waterloo, General von Blücher, caused a stir during the celebrations in London following Napoleon’s defeat simply by wearing an elaborate moustache at a time when face fashion remained smooth. The Regency Dandies had never seen anything quite like it, and von Blücher set a trend amongst military men of a certain rank that defined them thereafter.

Another German, Prince Albert, was perhaps instrumental in popularising the old upper-lip ‘hairy bogie’ during his high-profile stint as appendage to Queen Victoria. By the middle of the 19th century, moustaches were becoming visible and fashionable adornments on the male countenance; and even if they weren’t, gargantuan whiskers certainly were. Then the beard – for so long a symbol either of idleness or insanity in England – began to sprout on the chins of the powerful and influential. By the back end of the Victorian era, beards had blossomed into huge bushy beasts – impenetrable pubic forests that made every proud owner look ten years older and ten stone heavier.

These thick, dense thickets of fuzz could be worn by everyone from a sporting hero of the masses like the cricketer WG Grace or the age’s great scientific mind Charles Darwin. Indeed, it’s hard to think of an eminent Victorian bereft of a beard; a big beard appeared to signify the virility of Empire and the imperial supremacy of the British. On a more frivolous level, the legacy of von Blücher was also expanded upon as we entered the Edwardian era, when extravagant moustaches re-emerged more outrageously flamboyant than ever – the kind later to be seen under the noses of Jimmy Edwards and Sir Gerald Nabarro as a means of distinguishing both from the spotless visages of their contemporaries.

The final Prime Minister whose face was framed by an archetypal Victorian beard was the Marquess of Salisbury, who left No.10 in 1902 (though we may have a more austere example of the beard renting the property soon – if nobody has confidence in Boris, that is). The last PM to have merely a moustache was Harold Macmillan; he may have stepped down from office in the year that Beatlemania broke, but Supermac had earned his spurs in the distant trenches. Indeed, if we take a rare look at the First World War in purely aesthetic terms, it’s interesting to note how heavy facial hair was one of the minor casualties of the carnage. As a consequence, the Roaring 20s were largely clean-shaven, with the pencil-thin moustache being the sole concession to the former masculine trademark.

For around half-a-century, the beard retreated into a kind of shadowy cult existence; often, it implied an intellectual elitism, usually worn by academics, playwrights or earnest folkies. There was a mini-revival among students inspired by both the fad for ‘Trad Jazz’ and the charismatic firebrand Fidel Castro at the turn of the 1960s; but the beard didn’t really return to the faces of the young on a wider scale until the end of the decade. Once The Beatles gave notice to the Mop Top era by growing moustaches, the razor blade was suddenly downgraded as an essential item in every gentleman’s bathroom cabinet.

Amongst the numerous variations on offer in the hirsute hippie era, the Zapata had its moment – eventually becoming synonymous with such contrasting icons of the age as Peter Wyngarde and David Crosby – whereas the beard came to be regarded as an indication of revolutionary radicalism whilst also regaining its old quasi-religious symbolism, as seen on both Maharishi and Manson. By the beginning of the 70s, however, the ubiquitous beard was much as home on the effete chin of an Open University lecturer as it was on the huge blubbery jawline of Giant Haystacks. Even the defiantly androgynous Glam Rock had an unlikely beardie-weirdy in the shape of the larger-than-life Roy Wood.

Post-Punk, the beard represented the old guard as much as the gatefold sleeve of a Yes concept album, and the 1980s was relatively hairless as far as the face went; not until the ‘designer stubble’ craze at the end of the decade did young men looked upon as style icons feel brave enough to forego a shave again. The breakdown of the rigid rules and regulations governing the length of hair and the height of hemlines that began in the 90s (and has continued to this day) probably happened because popular culture finally reached a point where everything had been done before and there was nothing new left to say; suddenly, we entered a pick ‘n’ mix age in which the distinctive looks of recent decades could coexist simultaneously, albeit all stripped of their original context. The reappearance of the beard on young chins certainly wasn’t accompanied by a revival of the tribal significance it had possessed in the 60s; then again, nothing in the culture had tribal significance anymore.

Some men who grow a beard keep it for life – I’d never have known an uncle of mine hadn’t been born with one until I saw a photo of him in his clean-shaven youth, for example; others try it, don’t like it, and never try it again. I myself have never been drawn to it; sideburns are as far as I venture into that area, and being aware of their occasional itchiness makes me wonder how Hipsters or Imams manage to avoid their facial fungus becoming not only a nest for nibbling mites, but a repository for scraps of snacks. Not sure how women feel when their bearded men are amorous, though I should imagine the bushier breed are maybe preferable to the bristly brand; anyone whose stubbly father inflicted ‘chinny pie’ on them as a child could possibly have developed an understandably lifelong aversion to the latter. Women are remarkably adaptable to the individual image whims of their menfolk, however.

As far as most are concerned, a beard today symbolises little at all because its wearers are so varied. It can be worn by humourless Indie musicians, New Age gurus, ex-boy band members seeking to be taken seriously, movie stars aiming to prove their thespian mettle, slovenly students, old hippies, young hippies, and fat dads of both the urban and suburban variety. It has been, like every other fashion accessory of the last fifty years that began as a statement, utterly assimilated into the culture so that any sighting of one induces nothing more than a shrug of the shoulders and a ‘whatever’. Amazing how many paragraphs the subject can generate during the silly season, mind…