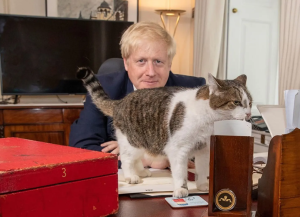 So, yes, it’s been another strange week-and-a-bit in these strange days. Boris ending up in intensive care; Brenda addressing the nation with her first message outside of the festive season in a long time and even paraphrasing Vera Lynn for that extra Blitz Spirit/Britain Can Make It vibe; Matt Hancock shaming easy target high-earners like footballers whilst conveniently neglecting to bring off-shore Oligarchs off the bench; oh, and Emily Maitlis attempting a ‘Walter Cronkite on Vietnam’ moment by abandoning the threadbare vestiges of BBC impartiality and delivering an impromptu Reith Lecture as a novel new ‘Newsnight’ intro. Yeah, Lockdown Britain is everything Remoaners promised Brexit would deliver – and even weirder.

The mainstream media reporting of events has become so wearingly sensationalistic and speculative that it’s no wonder the reaction of some has been to abandon initial ambitions the lockdown inspired; rather than learning a new language, a musical instrument or starting to write a novel, many have simply slipped into the junk-food/binge-watch routine and steer clear of the daily death-toll roll-call. On the other hand, social media being the maternity ward for the more outré conspiracy theory has unsurprisingly provoked a descent into medieval madness. Burning 5G masts in the baffling belief these objects generate evil is straight out of the dark children’s serial of the 1970s, ‘The Changes’, in which the western world undergoes a violent rejection of its dependability on technology by smashing all machines because they’re ‘wicked’.

Misinformation, or at best the poor communication of information, has also been responsible for the misconception that the humble domestic moggy is possessed by the virus. From what I can gather, misguided advice to keep cats indoors was actually specific to felines living in infected households; their coats when stroked by outsiders would still bear the residue of Covid-19 as much as any surface touched by someone with the plague, so preventing the prospect of the cat coming into contact with strangers was deemed sensible. My own personal worry is the same yahoos that thought 5G masts were spreading sickness may well single out cats for the same reason. Again, this is pure ‘she’s a witch’ mentality it would be nice to think we outgrew centuries ago; amazing how close to the surface such superstition actually is. Yes, the source of this virus does come from animals, but nature’s payback – if that’s what it is – stems from the disgusting trafficking and menu-adding of endangered species so commonplace in the Far East, not next-door’s cat.

When Benjamin Franklin said ‘Those who would give up essential liberty to purchase a little temporary safety deserve neither liberty nor safety’, he probably couldn’t foresee the populace of a free and democratic society prepared to accept the severe restrictions of civil liberties currently being imposed upon it. However, I think most people are content to go along with these restrictions for the moment by viewing them as a contract between the state and its citizens, a personal inconvenience done with a greater good in mind; the delicate equilibrium can be maintained as long as both play their part and the sacrifice is regarded as a just one. Reports of some law enforcers exceeding the traditional ‘policing by consent’ foundation stone of the police force in this country are no more helpful in maintaining the equilibrium than those who continue to irresponsibly gather in groups.

Of course, it’s difficult at times like these to discern how widespread the abuse of police powers is when the most OTT examples will naturally be seized upon by the media (both mainstream and social), even if these are not representative. But anyone with half-a-brain is well aware that certain constabularies have a reputation for over-zealousness, and if their officers have been given the green light to wander into public parks and disperse a couple catching a bit of sun that they might not be able to access at their place of house arrest, it’s no great surprise that these individual constables are becoming ever-more officious in their ridiculousness. Threats of roadblocks or demanding to rummage through the contents of shopping bags are undoubtedly overstepping the mark; in the case of the latter, no policeman, policewoman or Community Support Officer has the right to be an authority on such a subjective subject as what is or isn’t ‘essential’ when it comes to the supermarket shelves – even if you’re lucky enough to find some eggs. And not even the emergency legislation rushed through Parliament without question gives the police that right.

The sudden high visibility of the police is either an indication that the PM’s recruitment drive has borne fruit in record time or that they’re relishing throwing their weight around without having to worry about difficult things like catching burglars or solving murders. Maybe if they were always this omnipotent they’d actually act as a deterrent in neighbourhoods plagued by crime. I suspect there won’t be any choreographed clapping rituals for the boys in blue just yet; but maybe not being elevated to the status of secular saints currently occupied by NHS workers helps to keep them in check. I remember when the military briefly received a similar elevation around the time the bodies of dead soldiers were being driven through the streets of Wootton Bassett during the Iraq War; and just as politicians back then would tediously preface each reply on ‘Question Time’ by ‘paying tribute to the wonderful job our armed forces are doing’, they’re at it again now – only with NHS workers.

Whilst the recognition and acknowledgement of those doing a bloody hard job is perfectly laudable, the overnight establishment of the mass clapping does make me a tad uncomfortable – perhaps because the compulsory participation seems just a little reminiscent of the forced tears North Koreans had to publicly shed when Kim Jong-il died. How long before the police are knocking on doors at 8.00, demanding to know why the residents of the house aren’t standing on their doorsteps applauding doctors and nurses? As with the public display of appreciation for the army fifteen years ago, the ring-fencing of any service as beyond criticism can act as a convenient smokescreen to obscure the shambolic state of the institution that employs these heroes and heroines, and how little it pays them for their troubles.

Then again, perhaps clapping for the NHS is only able to fully function as a new national pastime due to the fact all universities are closed; the ritual has the potential to provoke a panicked rush to the nearest safe space, so if this is to continue after the lockdown, maybe a jazz-hands compromise is in order. Recognition of how difficult being on the NHS frontline can be should be a given, anyway, as should free parking in the grounds of hospitals for staff. And the abrupt determination to ensure rough-sleepers have a nightly roof over their heads is something else that didn’t need a pandemic to institute; the fact they were on the streets in such high numbers in the first place should have alerted authorities to an already existing emergency that needed sorting.

Oh, well. That’s the state of play. Herd immunity might have worked as an alternative had it not been rendered impossible due to the poor health of most western nations – especially the special relationship fatties of the US and UK. As it is, we are where we are. The previous post may well have appeared to be dealing with a trivial topic; but it was refreshing for me to do so. I need those moments of light relief because otherwise there’s only the one subject right now.

2 thoughts on “THE CLAP CLINIC”