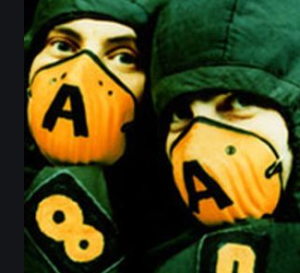 A woman fiddles with her hair in the mirror; we see the view she sees, so we express the same terror when the reflection suddenly shows a figure appear behind her – a menacing intruder in a gasmask. Despite the well-documented wealth of 1970s TV and film archive I own on DVD or that I’ve simply seen repeated over the decades, I’ve still never found out what this terrifying scene was from, a scene that impacted on my imagination as a small (not to say traumatised) child. We all have such moments when our exposure to cinema and television expands during those formative years, and this was mine. It defined the gasmask as a sinister object in my mind forevermore. I recall a ‘Doctor Who’ adventure a few years later called ‘The Deadly Assassin’, in which Tom Baker’s Doctor spends an entire episode in a nightmarish landscape called The Matrix – and a man in a gasmask appears in that. Oh, and for good behind-the-sofa measure, there’s a scary clown in it too.

Their undoubted practicalities (and reason for invention) aside, this whole gasmask thing has long been recounted by me before numerous friends ad infinitum; it’s why one of them purchased an authentic WWII gasmask for my birthday a couple of years back. That’s me wearing it on the image accompanying the post called ‘Interior Designs’ a few weeks ago. Unfortunately, when I took that photo the delicate object had already been damaged by yours truly, with the brittle rubber strap snapping as I attempted to fasten it to an ear. I guess that rules out my wearing it to pop to the shops in Lockdown Britain, which is a shame. Not only would I be enjoying the ultimate protection from the toxic breath of my fellow shoppers, but I’d also scare the shit out of a few in the process. As Paddy Consindine demonstrated when donning a gasmask in the memorably malevolent Shane Meadows movie, ‘Dead Man’s Shoes’, the object has not lost its power to send a shiver down the spine.

The humble gasmask would, I imagine, do a better job than those flimsy surgical masks that are becoming this season’s key fashion accessory on the high-street. I first saw some Chinese students wearing them a couple of months ago, but thought it merely understandable caution considering where this bloody virus emanated from; like most, I hardly anticipated the article being adapted as regulation sartorial equipment. So far, wearing one in public spaces has been optional – which is just as well if PPE is in as short a supply for those who need it for work purposes as we’re constantly being told by the media. However, the latest edict from that ‘alternative administration’ north of the border recommends the public wear the masks when out and about, if stopping short of enshrining it in law.

Post-Alex Salmond trial, it’s hard not to come to the cynical conclusion that every pronouncement to emerge from Krankie Towers is either intended to deflect attention from all the unsavoury rumours circulating the former First Minister or is simply another example of Ms Sturgeon’s opportunistic habit of trying to upstage Westminster. The UK Government, for all the mistakes it has made en route to where we are now, seems to have imposed the most severe restrictions on civil liberties with a fair share of reluctance – only finally enforcing the lockdown when the situation left it with little option. Making the same recommendation re the wearing of masks that was today made by the Scottish Government is something one can imagine it entering into as reluctantly as it did the lockdown, and for the moment the masks remain optional rather than compulsory – which is how it should be.

On the whole – at least going by my own experience – the public appear to be sticking to social distancing and are prepared to queue outside supermarkets and other stores with the patience of Soviet shoppers back in the USSR. Again, I can only go by what I’ve seen myself, but the mutual dance of distance on pavements and down Sainsbury’s aisles whenever a stranger approaches adheres to every guideline we’ve had drilled into us ever since this thing got serious. People don’t want to give it and, more than anything else, they don’t want to receive it. I don’t really think I’ve been close enough to another mask-free person to feel threatened so far. When it comes to those whose jobs involve constant exchanges with the public, the wearing of masks and/or gloves seems to me a sensible precaution the majority would take in their shoes; for the public themselves, whose visit to a supermarket may well be their sole contact with other people all week, I still believe the choice of head and hand-gear should be theirs.

The SNP’s slightly different take on the guidelines is – as already stated – a predictable development that is entirely in keeping with its habit of occasionally issuing statements it knows will garner headlines beyond Scotland. Especially at times like this, when attention has naturally been on the recovery and return of the man who remains Prime Minister of the whole country, the SNP is a bit like that middle child having to shout louder than its siblings to remind a distracted parent it still exists. But it is at least in a position to do so, unlike the sorry old Lib Dems. Not only has Britain’s forgotten party been hinting at the resurrection of the not-missed-at-all Jo Swinson, but it has also been virtue-signalling to the max on social media this past week in the absence of anything else to do. I have to admit I couldn’t recall the chronically pointless Ed Davey being elected successor to the dumped Swinson, but he and his similarly sad colleagues have been falling over themselves to stress solidarity with the nation’s Muslims by patting them on the head and ‘fasting’ for Ramadan. How bloody patronising. I look forward to the Lib Dems co-opting all of Britain’s myriad faith festivals over the coming twelve months, then.

Oh, well – let the Lib Dems get on with it. I should imagine most Muslims are laughing at them as much as those of us who subscribe to a different religion or none at all. Basically, nobody cares. It’s not like we’ve got other things to think about right now, anyway. The terrible toll the coronavirus has taken on the country’s care homes – now that the elderly residents are actually being regarded as people and added to the stats – is something I suspect we’ve only scratched the surface of so far; but it’s not come as much of a surprise considering how lowly the institution of social care for the old and infirm has figured in the policies of governments of either colour in recent years – and how much this unfashionable bedfellow of the super-sexy NHS has lingered in the shadow of its pampered partner. And if what used to be called Old People’s Homes have barely registered on the radar until the past couple of weeks, I’ve heard next to nothing of those equally at-risk homes housing the mentally and physically impaired, many of whose residents are amongst the most vulnerable in society. We shall see.

As we crawl towards the end of an April unlike any April any of us have ever experienced before, the situation seems to be at something of a crossroads. The lockdown can’t go on indefinitely, so when to tentatively lift some of the restrictions and apply a drop of oil to the static wheels of industry before it’s too late? If the SNP is recommending the wearing of the mask for reasons other than political point-scoring, maybe we’re not there yet.

6 thoughts on “BEHIND THE MASK”