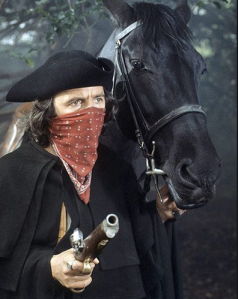 Quicker than you can say ‘Dah Diddly Quah-quah’, I opted for the dandy highwayman. Well, having a sartorial straitjacket imposed upon me by government was hardly going to see me abandon the habits of a lifetime and adopt herd mentality. I have a surfeit of scarves that generally tend to be aired in the winter months, but I decided to give one a summer outing as a stylish alternative to those crap blue plastic surgical masks ‘everyone’s wearing’. It’s the kind of object a writer for Vogue in the 1950s might have described as ‘gaily-embroidered gossamer-thin neckwear, an ideal evening addition to a chilly cocktail party on the September veranda’, but as much as I resent being told what to wear, it seems I’ll soon have no option when it comes to shopping.

Why shops will shortly demand such articles as mandatory wear when the donning of them in the newly reopened pubs and restaurants remains optional perhaps says a great deal about the half-arsed approach to Covid-19 of Boris Johnson’s administration. What we are currently witnessing is some pretty furtive bolting of the door on a stable that no longer contains a single horse. Aside from the clear message our beloved leader delivered on the eve of the lockdown, every piece of advice since then seems to have left the public in a ball of confusion as to what they can and can’t do when released from the confines of their homes.

Of course, once let loose from confinement, the respective social demographics react in different ways according to the MSM narrative – essentially, the Proles party and the middle-classes march; one bad, the other good. With that dependable bastion of law and order, the West Midlands Police Force, following the lead of the magnificent Met in appearing more concerned with arresting 12-year-olds for ‘racist tweets’ rather than preventing SJWs from flaunting placards and thus spreading germs in huge numbers, we cannot help but greet each pronouncement on social distancing with ever-increasing cynicism. What we have at the moment is neither one thing nor the other.

Yes, football’s back, but it’s bloody awful, played in empty stadiums with no atmosphere and hijacked by political causes that have as much to do with the beautiful game as tax-exiled millionaire racing drivers sponsored by autocratic Middle-Eastern regimes have to do with human rights. And shopping has gone from a dreary unavoidable outing to an even drearier unavoidable outing. In a way, I’m glad current circumstances have reduced daily shops to weekly ones; the thought of having to do it every day now is not one that fills my heart with joy. I couldn’t even gain access to the post office this morning without having to submit my name and number to a clipboard-clutching Jobsworth in the name of ‘track & trace’; I guess I had the last laugh in that no ‘government app’ can track & trace me on account of not owning a mobile phone; the Jobsworth in question was given my landline number, which will transmit info to Whitehall (or, more accurately Beijing) that I never leave my flat – which isn’t far from the truth, anyway.

Indeed, each imposition on our civil liberties in the name of protecting us from an epidemic I’m beginning to doubt even exists feels more and more like a Jobsworth’s charter; the pious, humourless forces of finger-wagging that have characterised, say, the anti-smoking lobby in recent years have been praying for a moment such as this, when their biased ‘expertise’ and claims of being an authority on public health have actually convinced our elected representatives that they should be entrusted with the kind of powers they could only previously dream about; and now they’ve been fully assimilated into mainstream government policy. I’ve no doubt one of the reasons why Boris Johnson’s administration has dragged its heels on implementing so many of these curbs on our freedoms in public has been down to its reluctance to come across as authoritarian; certainly in contrast to the hideously totalitarian SNP and our very own cuddly Labour Party, the Tories have given the public the benefit of the doubt. But they’ve been fighting a losing battle when all platforms broadcasting the ‘protect and survive’ mantra to the masses sing from a shared hymn-sheet.

My concern, which is not unusual for someone aware of a world before our oh-so wonderful century gatecrashed the party, is that once something is enshrined in law, those that enshrine it rarely repeal it. The statute books have a permanence about them that is quite unique in an era of built-in obsolescence and short-lived designs for life. Now that the powers-that-be have managed to emotionally blackmail the public into accepting draconian restrictions on their freedoms, why should they contemplate ever easing them? What we have now is normality-lite, a compromise no more satisfactory than the lockdown itself, and I’d rather not set foot in any reopened public space than make do with the excuse for them we’re being offered as better than what we had when every door was closed.

I was speaking to somebody yesterday – via Skype, of course – about the wartime generation, how they were denied the nice neat history lesson those of us born after the war have received from 1945 onwards. Due to understandable military sensitivity over divulging too much information, I would imagine anyone who wasn’t participating in the race to Berlin in 1944-45 didn’t necessarily know for sure when the end might be in sight. Yes, we know now that VE Day took place in May 1945 and hostilities effectively ceased for good with Hiroshima three months later; but those on the home front weren’t made aware in advance as to what day the Second World War would conclude. They weren’t provided with a date to look forward to as though the official end of the conflict was like looking forward to the Cup Final. Similarly, we have no idea when this current situation will end or when we can resume the lives we were leading before a virus that won’t kill most of us prompted the elected governments of the world to engage in simultaneous hara-kiri.

A second wave come the autumn; the prospect of another lockdown to bring to an end the sorry state of affairs being sold as the lifting of restrictions; the corrosive long-term effects of social distancing on the forming of friendships and the ability to interact in public; the lingering mental damage of solitary confinement – and an economic meltdown too horrific to contemplate. Boy, it’s certainly good to be alive at the moment. For those of us who have a small handful of social outlets that have all been taken away from us, this bloody tunnel could do with one or two lanterns en route to an end that is not remotely visible. Other people were viewed as fairly scary creatures before any of this happened; now they’re one notch up from rats carrying bubonic plague. Oh, well – could be worse. At least I’ve got my white privilege to be grateful for. That’s always been such a help.