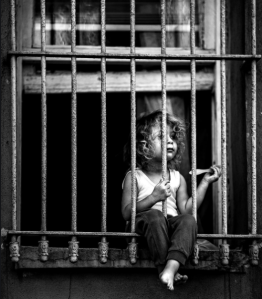 I suppose it’s inevitable that a medium in such a state of perilous uncertainty over its future as television will go out of its way to promote and overhype some programmes; these tend to be those it hopes will grab the headlines and fuel 24-hour social media discourse, thus providing another stay of execution. In the meantime, the few remaining gems that sparkle under the clickbait radar are usually the ones worth investing in. A wonderful example of this is ‘There She Goes’, which recently completed a second series on BBC2. The central premise of the programme is not an easy sell, dealing as it does with the challenges faced by parents with a severely mentally-disabled child. Not, one would imagine, the formula for a classic sitcom; however, ‘There She Goes’ hovering between humour and pathos actually isn’t that far removed from a good example of the classic sitcom such as ‘Steptoe and Son’, which often had bleak moments worthy of the finest drama – perhaps reflecting the fact it was the first comedy series to employ actors as leads rather than comedians.

Written by Shaun Pye and largely drawn from his own personal experience as the father of a learning disabled child, ‘There She Goes’ demonstrates how humour can even be derived from what on paper appear to be the least humorous circumstances imaginable. Miley Locke, the little girl who plays Rosie in the series, is not learning disabled but gives an astonishingly convincing performance in a part that no child with such a condition could possibly have reproduced on cue. At times, Rosie is akin to a Tasmanian Devil let loose in suburbia, with no comprehension of social mores or awareness of how to behave in public; she takes the obsession with random objects and the endless repetition of routine that are hallmarks of autism to extreme limits. Whilst all parents are familiar with the way in which babies are no observers of adult sleeping patterns, most understand this will pass; ditto the anarchic hyperactivity embodied in toddlers who have just mastered the art of putting one foot in front of the other – not to mention the difficulties of non-verbal communication that are overcome when speech develops. However, in the case of a child like Rosie, those early-years characteristics remain intact and permanent while she physically grows.

The two parents in ‘There She Goes’ are played by David Tenant and Jessica Hynes. Hynes in particular is outstanding as the mother worn down by the pressures of raising a little girl whose condition would at one time have been categorised as ‘mentally handicapped’. She manages to convey the stresses of the situation with beautifully understated acting, able to sum up what can feel like the wretched hopelessness of her life with a simple weary facial expression. The strain on Tenant’s character is manifested differently; at times, he can come across as selfish and indifferent to his wife’s sufferings, yet the honesty in both the writing and acting accurately portrays the reality of how even the most trying of situations bringing out the best in people can also provoke nihilistic despair. These parents are not saints selflessly dedicating themselves to a noble cause; they have no choice. They’re human beings who sometimes just want to enjoy life like everybody else, yet can’t.

‘There She Goes’ can be both comic and tragic, at times heartbreakingly sad yet simultaneously warm and witty; there’s no way that living with a child like Rosie can be dramatised unless it encompasses the exhaustingly wide range of emotions such unique circumstances can inspire. Perhaps the fact the family in it happen to be living in a leafy middle-class London neighbourhood could suggest to viewers with no personal experience of Rosie’s condition that it never happens to those residing in less salubrious surroundings. Rosie’s parents inhabit a nice big house with a nice big garden and are able to get her into a nice special school environment that is designed to deal with her needs. No, they’re not exactly struggling ala ‘Cathy Come Home’, yet they still have to encounter the constant interference of ill-equipped social workers and the condescending approach of teachers and medical professionals whose understanding of living with Rosie 24/7 is minimal; it’s something that can’t be learnt by acquiring a degree.

If one were to take Jessica Hynes’ character and make her a single mother, placing her and Rosie in a council flat, it’s possible the series would adopt a much darker tone; then add the lockdown scenario, whereby even the paltry few hours’ break Rosie’s mother has from her child when she’s at school is removed and she’s entombed with her all day long. Social media and the MSM have been inundated with the whinges of parents locked-in with mentally sound and able-bodied kids ever since schools closed their doors, yet how much worse it could be. There are endless untold stories of the damage being done by what feel like unnecessary measures imposed upon people who will never overwhelm the NHS or die of Covid-19 even if they catch it. And I couldn’t help but think of both this fact and ‘There She Goes’ when the saddest story of the week was reported.

Olga Freeman, the 40-year-old ex-wife of a ‘celebrity photographer’ (the angle seized upon by the MSM) was this week in the dock at the Old Bailey, charged with the murder of her 10-year-old son Dylan. According to reports, Dylan was disabled and required 24-hour care; his specific disability was not mentioned, though the court was told his mother had been ‘struggling to meet Dylan’s care needs for the last year, as he became older and bigger’; the boy’s behaviour was described as having become ‘especially challenging’; it was said that ‘during lockdown, he was not able to attend school and the burden of care had fallen more heavily on the defendant, together with assistance from her friend.’

Within those two statements are two poignant observations – firstly that a child, possibly similar to the one portrayed on ‘There She Goes’, may be just about controllable when small; however, the fact they will physically mature as normal whilst remaining mentally frozen places even greater demands on the parent. Secondly, the inhumane imposition of the lockdown has increased the burden of living with such a child to the point whereby some might understandably crack, especially if deprived of a wide support network of family and friends. Of course, the lockdown cannot be held wholly responsible. Virginia Woolf’s wartime suicide is often attributed to her inability to cope with air-raids, yet not everybody disturbed by German bombing took their own life just as not every parent locked-down with a disabled child will take its life; but what the Luftwaffe did to Woolf was what the lockdown may well have done to Olga Freeman: it exacerbated something that was already present.

Extreme special needs children are poorly prioritised by both private and public sector at the best of times; in the worst of times, their care should not be regarded as something to be shifted solely onto parents for the duration as though the children can be simply lumped-in with ‘ordinary’ kids. It’s hard enough for such parents during actual school holidays, but at least they have an end in sight then; the decision to shut down society doesn’t seem to have taken them into consideration at all. The sad death of Dylan Freeman will be an extremely difficult case to judge fairly by those with no first-hand experience of the challenges faced by these parents; a mother murdering her own child goes against every instinct we hold dear, yet I sincerely hope reporting can avoid any ‘Myra Hindley’ portrayals of this particular mother, even if the revelation of the full details paint a less than flattering picture of the accused. A series such as ‘There She Goes’ feels fresh because it’s unearthing a side of life TV viewers have previously been denied; but it shines a small light on a truth for many families that can have unbearably tragic consequences for all concerned if they’re effectively abandoned.