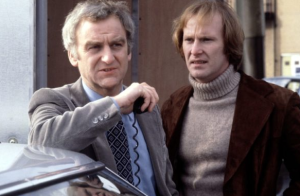 The only episode of ‘The Sweeney’ I was allowed to watch when it originally aired was a late entry in the series; the bargaining chip was the inexplicable presence of Morecambe & Wise as guest stars. I suppose maternal permission was influenced by the expectation that Eric and Ernie would help tone down the violence for which the show was notorious in 1978. Unbeknownst to my mother, I’d already seen an episode screened past my normal bedtime whilst staying at my grandparents’ place during a school holiday; there was never any set bedtime there, so I sat in on ‘The Sweeney’ with granddad and grandma and was treated to a full-frontal pair of tits on their little telly as a reward. If there was one element that gave the adventures of Regan and Carter playground plus-points in the 1970s, it was the perennial possibility of naked female flesh. Along with the anticipated car chases and punch-ups, there was always the outside chance of a scene in a strip-club. There’d be no proper swearing beyond the use of ‘bastard’ (pronounced baa-sted) a lot, so a glimpse of bristols was the next best thing.

I don’t know why it was such a big deal when even our house’s tabloid of choice at the time – the Daily Mirror – had its own equivalent of page 3 back then, so it’s not as if you couldn’t catch a snatch of mammaries, anyway; but ‘The Sweeney’ had a special position in the minds of 70s children. It was the Holy Grail of adult TV shows. Everyone at school claimed to watch it regularly, but such claims were no different from pubescent bullshit bragging about sexual encounters. 9.00 was the cut-off point for most when it came to viewing habits; you might be familiar with the show’s theme tune wafting up from the front room as your head reluctantly hit the pillow, but few from my generation saw it during its original run. It was regarded as ‘hard’ TV – far more realistic than ‘Starsky and Hutch’, and routinely featuring unsettling cockney villains with stockings on their faces, robbing banks clutching sawn-off shotguns – just like the headline crimes you heard during the bongs on ‘News at Ten’ before you finally fell asleep.

To a 70s child, ‘The Sweeney’ had a similar mystique as X-rated movies or girlie magazines, a grown-up world you yearned to be part of but knew you frustratingly had to wait for – a wait that felt like an eternity. In the absence of the real thing, your imagination painted a picture so graphic that by the time you were old enough to see the series during its first full run of repeats in the early 80s, half of the entertainment value came from the dated fashions. Reruns continued well into the 90s, passing through numerous postmodern and ‘ironic’ appreciations or condemnations. Then came the spoofs, the parodies, the pastiches and the eventual homage of ‘Life on Mars’; along the way, the series was simultaneously praised as a slice of gritty realism that blew ‘Dixon of Dock Green’ and ‘Z-Cars’ out of the water as well as a misogynistic example of old-school macho attitudes we were well rid of. ‘The Sweeney’ remains all of these things, yet so much more.

After the best part of 20 years without seeing a single episode – though consistent viewings of VHS off-air recordings preserved numerous lines and scenes in memory’s amber for decades – I recently got round to adding ‘The Sweeney’ to my bulging library of archive British TV shows on DVD. I decided to start proper with the movie-length pilot, titled ‘Regan’. Even 46 years on, it’s possible to see the promise of both the lead character and the set-up in this groundbreaking entry in the ‘Armchair Cinema’ anthology series. John Thaw was a familiar face to viewers by 1974, appearing as a guest star in endless programmes as well as managing an early starring role in the mid-60s series about the military police, ‘Redcap’; but in the gruff and grizzled, hard-boiled character of DI Jack Regan, he stumbled upon the role of a lifetime.

Produced by Euston Films, the Thames division established to make drama entirely on film, ‘The Sweeney’ had some of its ground laid by the final two series of ‘Special Branch’ (1973-74) and recruited Dennis Waterman as Regan’s sidekick Sgt Carter, having impressed in an episode of the earlier series. ‘The Sweeney’ would take the approach of ‘Special Branch’ and push the grittiness to a new level for television. Unlike its predecessor, by focusing on the cases of the Flying Squad, Regan & Carter didn’t have to concern themselves with occasional espionage interludes and had free rein to concentrate on ‘blags’ of the kind that were commonplace when most businesses had physical cash delivered to their premises on pay day.

‘The Sweeney’ is far from being crass, one-dimensional action, however. There’s an abundance of wit in the dialogue, and Regan & Carter are well-rounded, wholly believable characters whose banter and buddy-buddy relationship rings true in the context of their situation. The line between copper and criminal was never more blurred than in ‘The Sweeney’, though in his own way DI Regan possesses as strong a moral streak as Sgt Dixon; he’s averse to bribery and would never be in the pocket of a villain. At the time of its original broadcast, a series of high-profile exposés on real-life Met corruption hogged the headlines, so for all its seemingly unflattering portrait of Scotland Yard, ‘The Sweeney’ actually paints the police in an encouragingly positive light. If anything, Regan’s true nemesis is not the blagger, but the ‘fifth-floor bottlers’ at the Yard, forever frustrating his investigations with bureaucratic interference. Regan is more comfortable as the Wild West sheriff than being marooned behind a desk, happier tooled-up with a shooter than pushing a pen, in his element on the street rather than undergoing ‘diversity awareness’ courses.

In many respects, ‘The Sweeney’ is the definitive British TV series of the mid-70s; the landscape that Regan & Carter screech their tyres through is one of a rundown, worn-out country falling to pieces – and Regan himself often appears to mirror the state of the nation. Despite being able to chase villains on foot, he and his second-in-command smoke a breathtaking amount of cigarettes, they drink like borderline alcoholics, and they each bed a different ‘scrubber’ every episode. Men like them probably still exist, but they’re not portrayed on emasculating primetime television anymore. In one episode, Regan’s ex-wife looks despairingly at him and says ‘You’re 35 and you look 45’, and it’s true that all the men in the series whose ages are stated do indeed look at least a decade older by today’s standards, though I guess all those fags, booze and birds took their toll. Interestingly, however, very few of them are obese.

Regan & Carter take no prisoners and no outsiders are exempt from their contempt. They don’t single anyone out for special treatment, failing to distinguish between posh-boys, northerners, Scotsmen, Irishmen, blacks, Arabs, gays, lesbians, prostitutes – all are fair game for piss-taking and disdain, and all have their derogatory nicknames characteristic of the era. Watching it with a 21st century head on is a pointless exercise; one has to enter into the spirit of the times as much as viewing a Hollywood Film Noir from the 1940s; it’s a different world and one with its own surreal rules and regulations. Even something as basic as the bizarre side-partings and fuzzy barnets of the bad guys becomes the norm after a few episodes, as does the slang. One quickly accepts this world as a separate entity from reality – which is ironic considering realism was a key factor that gained the programme such critical and commercial success first time round. Coming to it anew at a moment when the contemporary world seems a more uncertain environment with each passing day, there’s something oddly comforting about the world inhabited by ‘The Sweeney’; it’s rough and it’s ready, but you know where you stand.