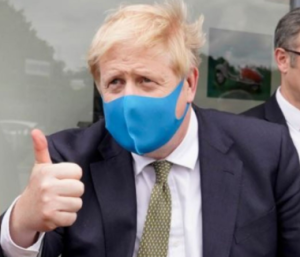 Events, dear boy – how they have a habit of forming history’s judgement; and the trouble with events is that they happen at the least convenient time. Alas, poor Eden – Anthony spends the best part of a decade in Winston’s shadow, gets his big break at last, and then Nasser nationalises the Suez Canal. Of course, events test the mettle of leaders, but it all depends how long Prime Ministers have to prepare for them; Churchill saw WWII coming for years and had plenty of time to get ready for the call, knowing all along he was the right man for the job. As for the incumbent tenant on Downing Street, he appears to have been caught completely unawares. Boris withstood the relentless onslaught of the Remoaner alliance both in Parliament and in his own party for the first few months of his premiership, yet the sweeping victory in last December’s General Election probably gave him the impression he’d triumphed over the worst setbacks he’d ever have to face at No.10. Was it a case of complacency in the immediate aftermath of the most comprehensive Election win in a generation that caused the PM and his victorious administration to underestimate a certain Chinese virus? Or did it simply expose how incompetent he and his team actually are?

Well, the latter certainly seems the case when one looks at indirect consequences of the pandemic – particularly the exams issue, with the Government putting its faith in an algorithm that downgraded results across the country; the U-turn that followed the subsequent uproar was one of a dazzling run of them that must have provoked a fair amount of spinning in Mrs T’s grave. No wonder the nation doesn’t know where it stands re coronavirus restrictions half the time – Boris and co don’t seem to know either, sending out constantly changing mixed messages on a daily basis; his administration is still behaving like a minority one, not really exhibiting the clout and confidence that usually comes with a large majority. The lame, belated reaction to the most disruptive BLM protestors and the damage they did to city centres in the summer as they flouted the lockdown was the timid and spineless response of a Government terrified of saying the wrong thing and misjudging the public mood. But this is a Government that can afford to; it has an 80-seat majority. In some respects, Bo-Jo shares something with Richard Nixon in that he wants the people to love him; they certainly won’t respect him if he doesn’t grow a pair.

The swagger and bluster that has always been a Boris Johnson trademark has undeniably been muted these past few months; how much that is down to his own – by all accounts – extremely serious brush with Covid-19 or his basic inability to cope in a crisis is open to debate. But the fact is he has been an often-absent and routinely ineffective leader at a time when the country has required a Prime Minister with authority and gravitas; he has provided neither. I suspect his reluctance to be viewed as an illiberal, authoritarian politician caused the dithering and delay in taking the extreme and unprecedented decision of closing the country down, and then when it happened it was so sudden and ill-thought out that the ramifications for the nation have been disastrous.

Chancellor Rishi Sunak has hinted hefty tax rises are imminent – though these were inevitable when the Government has been paying the wages of workers not working; the hospitality industry is attempting to get back on track, but social distancing rules and the uncertainty over mask-wearing is preventing it attracting the amount of money-spinning punters it depends upon. An economic recovery won’t hail from that quarter. Many white-collar workers are still dragging their feet in returning to the workplace, though much of this has been blamed on the difficulties of social distancing in that environment. At the same time, manual workers from a very different demographic have kept the country running and have done so without the luxury of home ‘work spaces’ from which to conduct Zoom conferences. Middle-class professionals having 80% of their earnings covered during the furloughing scheme managed to manage – though this didn’t translate quite so well to lower income households with far tighter budgets. But even beyond the economic fallout of the lockdown, there is the human cost.

Too little thought was given to the impact on the mental wellbeing of friends and families suddenly separated as though the Berlin Wall had appeared between them overnight. Elderly relatives marooned in care homes, confused special needs children in care homes of their own barred from seeing their parents for months, terminally-ill patients unable to say goodbye to loved ones – and what of those living alone and having their isolation intensified as the few contacts they had with the outside world at the best of times abruptly ceased? It’s no great surprise that cases of depression and suicides are both on the rise.

And still Project Fear staggers on, with its damage already done. A couple of weeks ago, I was out walking, not intending to pop into a shop and therefore mask-free; I saw a girl up ahead and skirted the kerb as best I could in order to give her plenty of room to avoid me – and it was an especially wide pavement, with a grass verge next to it. I noticed she headed in the direction of a garden gate and I assumed she was home; then I saw she hadn’t entered the premises, but was stood under a tree, a good twenty feet away from me; as I walked on, I glanced back and saw her emerge from the shadow of the tree and proceed on her journey. It seemed ludicrously disproportionate behaviour re the limited threat I posed to her; I mean, how close would she have to get for me to infect her with my corona-free germs? I laughed and shook my head and then paused, wondering if she’d lost a friend or family member to the virus; perhaps her caution in that context was understandable, but it still seemed OTT and maybe the end result of months of a media bombardment.

Indeed, the mainstream media continues to report coronavirus cases as though each equates with coronavirus deaths, keeping the panic going; local lockdowns are now regular occurrences as mothballed businesses reopen and then have to close their doors again, causing untold stress to their owners and a sense of being trapped in a perpetual Groundhog Day for the general public. It’s a bit of a bloody mess, but our leaders are there to deal with it, aren’t they? Yes, this is the time when strong, solid leadership is needed; and we ain’t getting it. One could argue nobody expected any of this, and it’s true few did; but these are the kind of unpredictable situations that serve as defining moments for Prime Ministers, and how they manage them measures the success or failure of their tenure in the job.

At the moment it looks as though Boris Johnson will be tarred with Covid-19 in the same way the loss of America tarred Lord North, Suez tarred Eden, the Three-Day Week tarred Heath, Iraq tarred Blair and Brexit tarred both Cameron and May. Naturally, there are the anticipated ‘rumblings’ from the backbenches, but that doesn’t necessarily mean an administration with an 80-seat majority over the opposition need quake in its boots. As for the man heading that administration, who knows? Is he up for the challenge ahead?

2 thoughts on “SHAM AT THE TOP”