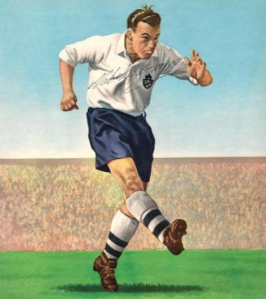 Along with Burnley and Blackburn, Bolton is one of those old industrial towns whose name is impossible to pronounce without slipping into the kind of antiquated Lancastrian linguistics that nobody under 50 in the vicinity probably uses now. For an outsider of a certain age, it’s hard to resist saying the name of the town as ‘Bowl-ton’, as was a hallmark of the ‘Coronation Street’ character of the 1960s and early 70s, Jerry Booth – as well as the much-missed steeplejack Fred Dibnah. I often do so as a means of gently ribbing my 14-year-old niece, who happens to be a native of the town. She doesn’t speak that way herself and I suspect few do there now anyway. When the late great architectural critic Ian Nairn visited Bolton in 1975 as part of his ‘Football Towns’ series, he opened his programme on the terraces of Burnden Park, original home of Bolton Wanderers, the football club that helped put the town on the national map. Three times FA Cup winners and until relatively recently a solid Premier League presence, the club has experienced tricky times of late, almost going out of business last year and currently languishing in the basement tier of English football, League Two (that’s the Fourth Division in old money).

Ian Nairn’s journey around Bolton town centre saw him give the thumbs-up to the newly-pedestrianised area in front of the Victorian Town Hall and the recent addition of the Octagon Theatre, though he was less impressed with the Arndale Centre, a bland new shopping precinct characteristic of the era; he did conclude, however, that in comparison to other town centres, ‘the twentieth century has treated it quite kindly’. Nairn reserved his ire for what Bolton had done to its architectural heritage in terms of houses of worship; his incandescent sermon in the ruins of St Saviour, a 19th century church in the process of demolition, is perhaps his finest and most moving moment on camera as he struggles to contain his distraught fury at the wreckage before him. ‘We talk about football vandalism,’ he says. ‘I don’t quite know how you would categorise the vandalism of the yobbos who did this. It makes me ashamed to be part of the same branch of biology.’

Ian Nairn made the short trek to neighbouring Preston after his emotional sojourn in Bolton; his programme captured both towns in transition. As with his similar examination of Northampton a couple of years previously, he found places that had been built around a profitable industry that was now in terminal decline, places that were desperate to catch a piece of the contemporary action without really grasping the potential of urban renewal. In the case of Bolton, a town that was once the international epicentre of cotton spinning, Nairn was visiting just as the entire industry was winding-up for good. He had missed its peak years by a good five decades, with 1920s Bolton boasting over 200 cotton mills. For such towns that grew on the backs of businesses that were effectively redundant by the 1980s – and I’d include those fuelled by mining in that – finding an identity and trying to stop the rot has proven to be a difficult task ever since.

Bolton has followed a familiar path in the wake of its traditional industry’s decline, embracing the intellectually-stimulating world of call centres, IT companies and so-called service-based businesses; perhaps the sole old-school business remaining is the Warburtons bakery, a firm that has looked favourably upon Brexit; this stance places it in tune with Bolton West, which voted Leave in the 2016 EU Referendum, but out of step with the Remain constituencies of Bolton North East and Bolton South East. A prominent pro-Brexit business at least gives the town something of its own personality when, having been swallowed-up into Greater Manchester along with fellow Lancashire towns like Oldham, Rochdale, Wigan and other pools coupon names, Bolton could otherwise have the feel of yet another faceless suburb of the metropolitan behemoth on its doorstep.

However, the main reason I use Bolton here is as an example of a town that is today suffering more than most under the draconian restrictions brought about by the Government’s ineffective and doomed strategies to combat Covid-19. Lockdown tactics were intended to be eased in Greater Manchester last week, though this has been abandoned in favour of reintroducing all the tougher measures that made life such fun earlier in the summer. A rise in reported coronavirus cases was inevitable as soon as the more severe rules and regulations were relaxed, yet this is evidently a pattern that will endlessly repeat itself from now on with no end in sight. Pubs, cafés and restaurants in Bolton are back to offering a limited takeaway service and the good folk of Bolton can no longer socialise beyond the borders of their own homes once more.

Matt Hancock lays the blame of Bolton’s high number of Covid cases at the door of those in their 20s and 30s; apparently contact tracers cite several public houses where the spread of the coronavirus has been significant. The Health Secretary has now imposed strict opening hours on Bolton hospitality venues whereby they will be forced to close between 10pm and 5am; visiting restrictions where care homes are concerned will also be revived. Bolton Council had pre-empted Hancock’s announcement at the weekend, proclaiming it would be reverting to the previous measures with immediate effect, informing the citizens of Bolton they can no longer mix and mingle with people from other households either indoors or outdoors and should avoid public transport unless ‘essential’ – and this coming at a time when the Government is now telling everyone they need to return to the workplace ASAP; what – an enclosed space full of strangers from a different household that one has to get to by travelling on a bus full of strangers from a different household? No wonder a population successfully terrified by Project Fear isn’t buying into it.

One could say the decline in the death toll in recent months has proven that the lockdown and all its subsequent spin-offs have worked; but the death toll was never medieval Black Death levels, anyway. Those who were at risk in the beginning remain at risk now, and that was always going to be the case. Of course they need to be protected and the focus should to be on the most vulnerable in the event of a ‘second wave’ just as it should have been at the start of the pandemic. Apparently, the average age of the majority of actual fatalities related to Covid-19 is 82, and the average life expectancy in the UK is between 79 and 83, depending if you’re male or female. Therefore, the appalling failure to prioritise care homes back in the spring remains the best example of how the response from Government has been wholly inadequate.

It should be possible to question and criticise this without being instantly bracketed alongside serial conspiracy fruitcakes like David Icke and Piers Corbyn. It should be possible to question and criticise the mixed messages of social engagement in ‘the new normal’, the dubious wisdom of mask-wearing, and the incalculable damage to both the economy and the future mental wellbeing of the populace without being shot down. Placing hopes in the rushing through of a barely-tested vaccine feels futile, and what Bolton is currently being subjected to will surely simply keep on happening over and over again in different parts of the country if we continue to pursue policies that are clearly unsustainable. At the moment, we appear to be trapped in a Groundhog Day of a nightmare it seems none of us are ever going to wake up from. We all in live Bolton now.