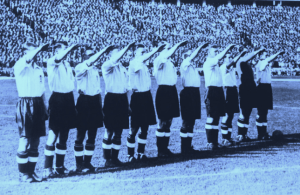 ‘Suppose that, for one reason or another, all the propaganda was in the hands of one or very few agencies, you would have an extraordinarily powerful force.’ No, not a contemporary observation on the small handful of corporations that control the flow of information to the western masses in 2020, but a snippet of an interview with the eloquent visionary Aldous Huxley from US TV in 1958. I stumbled upon this 62 year-old gem the other day on YT whilst that very medium was no doubt logging my ‘like’ in order to suggest something else in its vast archive that might appeal to me based on the information already accumulated. Huxley – along with CS Lewis – died the same day as JFK, so only had five years left to live when this interview was filmed; but he referenced ‘Nineteen Eighty-Four’ in it, a work written by a former pupil of his (Orwell – as Eric Blair – was at Eton when Huxley briefly taught French there at the end of the 1910s).

There’s something of the torch being passed on here; as well as his association with the future George Orwell, Huxley was also friend to a literary giant from a previous generation – DH Lawrence – during the 1920s, though he himself outlived Orwell by more than a decade. He championed ‘Nineteen Eighty-Four’ upon its publication, but astutely foresaw that governments would eventually rely less on the intimidating threat of terror in the form of physical violence to suppress their rebels, viz. the methods that characterise Orwell’s novel; Huxley envisaged a more sinister development whereby totalitarian regimes rule by consent, having seduced their slaves into inertia with trivial pleasures that persuade them to accept their servitude with a shrug of the shoulders; they might even grow to love it. The brutal tactics of the Nazis and the Soviets would be superseded by a subtle illusion of democratic freedom, utilising the techniques of advertising to convince man his oppression is not oppression at all and is instead being done with the best of intentions for his own long-term good. State-sponsored chemicals would also play their part in this mass deception; and as someone who requested (and received) the administration of LSD on his deathbed, Huxley knew all about the potency of drugs.

Huxley had outlined the principles of this future society in 1932’s ‘Brave New World’, a society he himself described as a ‘negative Utopia’. Prior to the Great War, writers like HG Wells had predicted humanity possessed the capacity to ultimately resolve its outstanding problems and would emerge triumphant in the end; the generation that lived through the carnage of 1914-18 was less optimistic, and the soulless society portrayed in ‘Brave New World’ – which seems to have anticipated so many of the scientific and sociological advances we have subsequently been persuaded are for mankind’s benefit – is a far more dystopian vision of how the state presents its lethal weapons as must-have luxuries to keep the populace in line. Huxley’s prophesies of the direction the world might take in his absence didn’t involve one of the 1960s’ more erudite rock bands taking their name from his chronicle of mescaline use, ‘The Doors of Perception’, but 2020 in particular often feels like a world to which Huxley and Orwell were joint midwives.

When Huxley wrote to Orwell following the publication of ‘Nineteen Eighty-Four’, he said ‘Within the next generation, I believe that the world’s rulers will discover that infant conditioning and narco-hypnosis are more efficient as instruments of government than clubs and prisons’. That said, a combination of the two can be effective. As the curriculum of Britain’s primary schools is gradually immersed in a ‘Janet and John’ version of Critical Race Theory, the indoctrinated grownups recite the oven-ready dogma courtesy of their abundant mouthpieces and the state’s storm troopers turn to Orwell for tips on how to police dissent. Then the spirit of Huxley re-emerges as, following months of clubbing and imprisoning should anyone dare question the wisdom of the programme, we are informed via a media fanfare and crocodile tears from a thoroughly incompetent Health Minister that a wonder drug has arrived to deliver us from evil. It’s not called Soma, the hallucinogenic antidepressant which is a compulsory panacea for the population in ‘Brave New World’, but one of its first ‘volunteers’ was a Mr William Shakespeare. Rumours he was followed by a Miss Austen and a Mr Dickens remain unconfirmed.

As if the first shots of a vaccine wasn’t enough of a Covid-related story to get the MSM excited this week, it’s also been able to indulge in the perennial habit of rounding on one of its own – in this case, Sky’s veteran broadcaster Kay Burley. Most people probably couldn’t care less if Burley celebrated her 60th birthday with a few chums; but perhaps the main reason the event has caused such an uproar and led to a temporary suspension is the fact Burley has been one of the guilty parties in whipping up the hysteria that has accompanied Covid-19 ever since the first lockdown. The same double standards and hypocrisy she relished accusing Dominic Cummings of back in the summer obviously didn’t apply to her restaurant-hopping, tier-breaking birthday bash; yes, it’s yet another case of ‘do as I say, not as I do’. One of television’s prime lockdown cheerleaders and serial demander of ever-tighter restrictions clearly doesn’t believe she should practice what she preaches; now, there’s a surprise.

In a media landscape that seems to require fresh sensation on a daily basis, Kay Burley’s birthday party swiftly usurped the story that opened the week, and that one managed to combine the year’s two favourite subjects. When footballers began the eye-rolling ritual of taking the knee before kick-off a few months ago, the shrewd cultural commentator Douglas Murray suggested one reason they went unchallenged was due to the ceremony being enacted in empty stadiums; he wondered if their narcissistic virtue signalling would be tolerated once fans were allowed back. Well, no – it turns out voluntary submission to a political organisation not exactly overflowing with tolerance itself isn’t actually regarded as being part of the game by those who fork-out for the privilege of watching it. Ah, yes, football fans – the hardcore support that kept the game going during the hooligan decades, when polite society regarded football as being about as cool as cock-fighting or bear-baiting. How refreshing it was to not have them at the ground for once, so the authorities could impose the Woke agenda on sport as well as every other facet of pop culture.

I guess it was unfortunate that Millwall FC – a club with something of a ‘history’ – should be one of the first to let fans back in; the boos that greeted the players’ BLM homage were immediately seized upon by the outraged free-ticket brigade who naturally put the inexplicable opposition to this noble gesture down to racism. What else? Let’s not mention the findings of a recent poll whereby 55% said they believed BLM have increased racial tensions in the UK – and 44% of BAME Brits agreed. No, far easier to stick to the narrative and ignore the fact that taking the knee no more belongs in one of this country’s genuine multiracial success stories than the Nazi salute did when England players were forced to give it in Berlin in 1938. Let’s leave the pat Identitarian lectures to the Vicar of bloody Dibley, eh? Millwall players have already announced they won’t be kneeling before their next fixture; hopefully, the rest will follow suit and this ridiculous charade can leave the field of play. If not, more boos until it does, please – for silence isn’t so much violence as surrender. As Aldous Huxley said, ‘The price of freedom is eternal vigilance’.