I’ve almost forgotten now, but around six or seven years back I set up my first website; it was essentially established to sell a DVD box-set of ‘Exposure’, my satirical take on Operation Yewtree hysteria. The 14-part series was the first I’d posted on YouTube that wasn’t so much a slow-burner as an overnight sensation, so it had a guaranteed fan-base. Online, ‘Exposure’ had scored viewing figures I’d never previously achieved and had put me in touch with many like-minds who turned out to be much-needed kindred spirits. Unfortunately, the DVD didn’t sell in the numbers that the persistent requests for it suggested and I eventually closed the site, having sold perhaps less than a dozen copies. I’d never really thought about a website again until a few months ago, when the sudden and thoroughly unexpected upsurge of interest in my video output swelled the ranks of the biggest audience my numerous creative outlets can call upon.

Although I know for sure there have been a few curious crossovers, my respective audiences are generally ignorant of one another. Some follow my output on YT and Vimeo, some read this here blog, and there are even some that occasionally buy one of my books; I know of some who have tried all three, but I’m conscious that there are probably thousands to have devoured the likes of ‘Buggernation Street’ who aren’t aware there’s such a thing as the Winegum Telegram (scandalous, I know) or that I’ve penned and published novels, poetry collections, essays, non-fiction and so on. I suddenly felt I was guilty of doing something I detest in contemporary media, i.e. the splitting and streaming of different interests into specialist ghettos rather than offering an abundance of choice under one all-encompassing umbrella. Why not construct a solitary basket for housing every egg? Hey! Didn’t I once have a website?

Whereas my first website was devoted to one project, this new effort would contain the lot – features on my books, my videos, this here blog, and – of course – ‘Buggernation Street’. I figured as the YT audience is by far the largest, it made sense to lure the crowd to the website by giving them the humour they’re familiar with and then when they’ve wiped the tears from their eyes and put their split sides back together, they might just wonder what else I can do. With this in mind, I thought it might be amusing to invent an entire back-story for the Telegram, very much in tune with the kind of thing the video viewers would expect. In this parallel universe version of the blog, the Winegum Telegram enjoyed a century as a physical publication before becoming online only as of December 2015 (when the enterprise actually really began).

In the alternative history of the Winegum Telegram, it was launched in 1915 with Lord Kitchener as the first cover star and was founded by ‘Victor Lucas’, a confectionary tycoon responsible for inventing the modern Winegum. He recruited writers of the calibre of W.C. Armitage (who wrote under the penname ‘Shanks’) as well as Beatrice Liberty-Bodice and Apollo Arkwright. When Victor Lucas Jr superseded his father as captain of the ship on the eve of WWII, he steered the publication into its most successful era sales-wise. In the 1950s, only the Beano sold more copies, though with talented scribes such as Anthony Polari, Sylvia Harris-Tweed and Oliver Buslingthorpe, that’s no great surprise. The Telegram remained in the control of the Lucas family until industrial unrest characteristic of the turbulent 1970s left the publication vulnerable to Aussie media magnate Barry Possum, who bought the Telegram in 1982 and put his stamp on it by remaking it in his own image. Yes, it almost sounds believable. 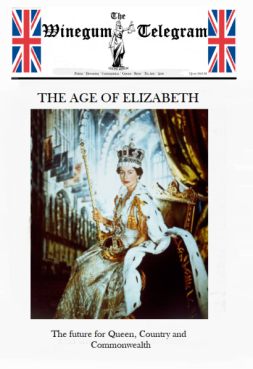 I surmised one way to enhance the illusion was to illustrate it by presenting a range of past ‘front covers’ from the publication’s physical era – issues portraying landmark events from the last 100 years, covering everything from VE Day to the Coronation, from JFK’s assassination to the Moon Landing, and from New Labour to 9/11. I can’t deny I had a jolly good time creating them and tried to make them look as convincing as possible. Again, the end result could almost be real. It’s quite a fancy little fantasy, anyway. However, I bring the reader very much back into this reality at the end of the feature by giving them access to a selection of genuine Winegum stories that might serve as an appetiser for following the blog should their curiosity be sufficiently piqued. But this particular section of the website, which I focus on here for obvious reasons, is just one element of something I hope will help make the site one of those you lose track of time on. We shall see.

I began work on the website in April and yesterday, after two months’ hard work building it up, I finally regarded it as being ready to go. Of course, it will be routinely added to, but for now the basic foundation stone is there for the world and his wife to point at. The home page capitalises on the trio of different online guises I’ve used over the years by speculating whether Johnny Monroe, Victoria Lucas and Petunia Winegum are three separate individuals or simply the shared aliases of the same criminal mastermind, and then the separate categories are lined-up for perusal: Profile, Books, Videos, Blog, Verse, Buggernation Street. The Profile is dominated by a spoof Grauniad evisceration of yours truly and a button that – if clicked – takes the visitor on a tour of imaginary charity shop LP purchases which are, naturally, in the worst possible taste. The presence of buttons to be clicked that then place the reader on a fresh page comes into its own in the Books section, in which the cover of each published book of mine is shown; anyone wanting to know a little more can click said button and will be treated to a description, a review by a reader (if there happens to be one other than me), and an opportunity to buy the chosen volume on Amazon.

I also employed the buttons to great effect on the ‘Verse’ section, in which four poetry collections are previewed via a trio of sample poems from each one – all of which had to be one-page poems for reasons of space. If you like your verse in bite-sized slices, they give you a taste of what to expect and rival Milky Way as a sweet you can eat between meals without ruining your appetite. The button facility also proved handy for the Buggernation Street page, enabling me to do a separate ‘memorabilia’ feature that serves as a further example of my fondness for fiddling with the past; front covers from a range of magazines one would have seen on the shelves of newsagent’s in the mid-70s are all given a ‘Buggernation’ twist. If the thought of living in a world where Albert Tatlock was the cover star of ‘Jackie’ or Len Fairclough got the same gig for ‘Look-In’ appeals, I suggest you pay it a visit. I appreciate some reading this won’t know what the hell I’m on about, but taking a look will help if that’s the case, and that’s what the website is all about, I guess – introducing those who only know one thing I can do to another.

This might seem like an extended advertisement for your humble narrator, but there’s even a page on the website that effectively is precisely that; if you remember ye olde high-street supermarket Fine-Fare, you might be surprised to see some of the items it used to sell by taking my name in vain. Anyway, as a welcome interlude from Covid, Identity Politics and the rest, I thought I’d publicise the website in a post on here and encourage you to pay it a visit. You might be pleasantly surprised and healthily horrified in equal measure.