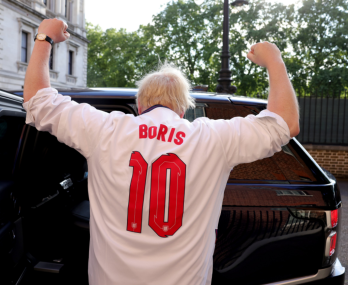 The Bank Holiday Monday that never was – not unlike the airport that never was or the garden bridge that never was; it’s not as if Boris Johnson doesn’t have a history when it comes to grandiose promises he fails to deliver on. I suspect his numerous wives and mistresses could testify to that. Mind you, in this particular case his promise proved to be wishful thinking, probably made when he slipped an England football shirt over his normal clothes – as you do. This was a promise dependent upon England winning Euro 2020 and, as everyone no doubt knows by now, we didn’t. I suppose it could be seen as an addition to the ‘we’re all in this together’ narrative that has run through the government response to the pandemic ever since the PM’s historic television address to the nation. Incidentally, that particular broadcast famously gatecrashed the long-held list of most-watched TV broadcasts ever in the UK when it was seen by almost 28 million viewers in March last year, and it’s now been joined in the top ten by the Euros final, coming straight in at No.4 with only the 1969 ‘Royal Family’ documentary, Diana’s funeral and (of course) the 1966 World Cup Final ahead of it. Seems the boys of ’66 will forever be the unsurpassable yardstick.

As every politician does when seeking to be seen as being at one with ‘the people’, Boris enthusiastically embraced the excitement stirred by Gareth Southgate’s team going one step further than any England side in 55 years. And who can blame him? It was the briefest of breathers as society came up for air before resuming the drowning-by-division that has characterised the past five years. And, as crassly opportunistic as Boris’s attempts to exploit a rare ‘feel-good factor’ have been, he was beaten to the finishing post in the toe-curling stakes yet again by the hilariously hapless Keir Starmer. The leader of the Opposition posed for several photos where he was pictured ‘enjoying the match’ with a pint strategically placed in front of him; the pint had been initially absent, then mysteriously appeared, and then when Starmer’s aides belatedly realised it was full, one of them no doubt took a sip (probably provoking the same appalled expression a child wears when given its first taste of bitter) and placed it back on the table to prove what a real man Sir Keir is. Mate, you’re a middle-class London lawyer who’d much rather be at Glyndebourne than Wembley; pretending otherwise just makes you look an even more disingenuous prat than you already are.

The fragile sense of togetherness marked by a great sporting occasion that captures the public’s imagination is never destined to last, and the swift resumption of where we were following the defeat of England by Italy on Sunday was swift even by the low standards we’ve come to expect. General Southgate’s baffling tactical decision to send the youngsters over the top at the climax of the penalty shootout was especially strange considering his own youthful exposure to the pressure of the spot-kick; but the way in which the failure of the trio in question to convert the vital penalties then saw the deflation of some manifested as depressingly predictable racist abuse aimed at the players has been exceptionally unpleasant. Of course, it has also curtailed the suspension of hostilities towards football’s fan-base from the chattering classes; quietly genteel empty stadiums, knee-taking and rainbow flags created the perfect environment for the middle-class dilettante to pose as a lover of the beautiful game, but then the barbarians that were greeted with similar horror when they descended on the Oval for the very first FA Cup Final in 1872 were let in again and look what happened!

Those that are fond of bracketing all genuine working-class football fans as frothing-at-the-mouth racist bigots and Brexiteers had the perfect excuse to rant as a tiny handful of brain-dead trolls took out their frustration on England’s black players. There has always been a small section of football followers who think this way, though let’s not pretend football has the copyright on them. Grafting the ideological cancer of Identity Politics onto the sport, with its incessant emphasis on race as the single most important characteristic of any individual, is something that stokes instant division by highlighting a factor that most decent people don’t even think about. In the build-up to the final on Sunday, social media was awash with statements pointing out how many members of the England team had ‘immigrant’ backgrounds, as though this not only somehow vindicated the divisive immigration policies of the past 20 years but was also responsible for the players being able to kick a ball in the first place; as long as the latter skill is good enough to warrant selection for the team, that’s all that matters. Attempting to portray a football team as ambassadors for free movement within the EU is hardly something that will inspire unity; the Left once again turning on the daughter of immigrants who has actually achieved her own success story by becoming Home Secretary just seems to show the hypocritical cant at the heart of this mindset is as toxic as any online racist halfwit throwing a virtual banana in the direction of Marcus Rashford.

So, ‘unity’ via an impressive run in a football tournament is over, so where does that leave us? Well, whilst there may have been a brief moment of genuine unity amongst the population when the first lockdown took place – back in those innocent, halcyon days when we trusted our elected leaders to do the right thing in a situation few of us then understood – that unity has subsequently dissolved and dissipated as warring factions and rival camps have asserted their opposing stances on the Covid issue. Pro-vaccine/anti-vaccine, pro-mask/anti-mask, pro-lifting of restrictions/anti-lifting of restrictions – the new frontline causes stepping into the space temporarily vacated by the Leave/Remain debacle. The Covid unity – if indeed it can be called that – fractured fairly early, probably at the point when lockdown was breached by BLM marches that seemingly had cart-blanche to break all restrictions without any of the over-officious response from the police that ordinary law-abiding folk were being exposed to on a daily basis.

The hypocritical activities of Dominic Cummings, Neil Ferguson and Matt Hancock lifted the lid on the ‘do as I say, not as I do’ approach to restrictions by the powers-that-be as much as the supine reaction by the forces of law and order to rule-breakers sharing the same ideology as them. As the restrictions that came with the initial lockdown have been extended way beyond the projected timeframe we were originally promised and the goalposts keep being moved in a manner many wished had been the case on Sunday night, people’s frustrations with the situation are perfectly understandable. Earlier on Sunday, I watched the men’s singles final at Wimbledon. After winning before an audience of non-socially distanced and largely unmasked multitudes in the stands on Centre Court, Novak Djokovic was then interviewed by Sue Barker, who appeared to be standing half-a-mile away. I couldn’t help but think of the Python sketch when a TV presenter interviews someone on the street with a hand-held microphone, pointing the mic at the interviewee when asking a question and then pointing it at himself when receiving the reply. Am I the only person whose increasing exasperation with the ludicrous rules and regulations still governing interaction with others makes me feel as though I’m now living in a permanent Python sketch?

Despite desperate pressure from the SAGE soothsayers and their media cohorts, the PM is to be commended for standing his ground and insisting all restrictions will end as of next Monday. Even if caveats keep being inserted into the promise – whether pub passports intended to coerce the young into submitting to the vaccine or the threat of continued mask-wearing – this is still the one promise Boris cannot shirk from delivering. If he doesn’t deliver, the fear is we’ll be living this way forever – and, let’s be honest, some have been so successfully conditioned they’d be quite happy with that. When divisions over the vaccine and mask-wearing run so deep that they are creating schisms between families and friends reminiscent of the Miners’ Strike, you know it’s time to curtail this social experiment. If only it were that simple to do so just by ending restrictions. They may think it’s all over, but sadly, it isn’t.

5 thoughts on “THE FINAL WHISTLE”