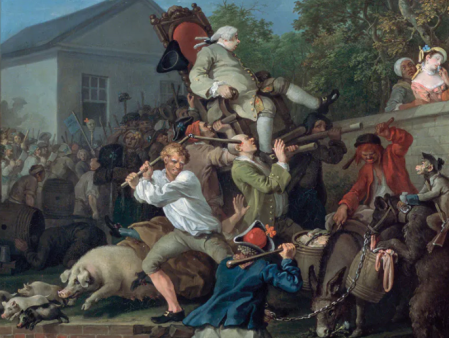 Depending on the number of spares after the heir, the one-time tradition amongst the aristocracy was that the son lowest in the pecking order went into the Church; it was seen as a safe, comfortable option for the one with little or no hope of inheriting the family title – a bit of a booby prize, but better than nothing. With the clout of the Church in British society now even more diminished than that of the aristocracy, one wonders if the preferred profession of the second or third son of the nouveau riche dynasties in the 21st century is politics. Very few new arrivals in Westminster Village appear to be particularly intelligent individuals, so perhaps the smart sons (or daughters) are earmarked for the same big business daddy made his fortune in whilst politics is reserved for the idiot offspring. It would certainly explain the deterioration in the quality of our political leaders over the past couple of decades; indeed, if one goes to the very top, has there ever been a worse run of Prime Ministers than Brown, Cameron, May and Johnson? Sure, history has had its fair share of Downing Street disasters, but four in a row seems a bit extreme.

Perhaps it’s no real surprise that politicians tend to quit earlier nowadays; few betting men would put their life savings on any of the current crop possessing the staying power of a Dennis Skinner or a Ken Clarke, for sure; and when they prematurely bow out, where do most go? Big business seems to be the career of choice – on the boards of all the companies, corporations, banks and financial institutions that donated to their party whilst they were in office; this suggests the business world was the desired destination all along and politics was merely a stepping stone to a place where political fame is a free pass to a directorship in the absence of business nous. So much for public service. In a way, this perhaps explains why so many of Westminster’s bright young things who not much more than a decade ago were singled out as ones to watch (in terms of potential future leaders) are no longer in politics and why the long-serving Parliamentarian could well be an endangered species.

The advent of the career politician travelling along the smooth conveyor belt has been discussed many times before, entering politics with no life experience beyond their social bubble and then quitting for big business, the kind that is equally detached from the majority of the electorate. Previously, most politicians made their journeys the other way round, beginning by earning a recognisable living and then politics being seen as the end goal, arriving with a wealth of life experience to bring to the table. For some, there was a vocational calling to politics, though it would be naive to suggest all past politicians were motivated by purely selfless good intentions; politics has always been a handy haven for crooks and charlatans, and though some of the more honest Honourable Members who avoid losing their seats gradually lapse into the geriatric irrelevance of an old retainer, many of the good men and women remain hard at it until age eventually catches up with them.

Still, it’s difficult to escape the feeling that the overall standard of politician and political leader has definitely declined in recent years. One could possibly argue the rot set in with New Labour and its emphasis on style over substance, a factor embodied by Tony Blair and subsequent Blair copyists like David Cameron. At the same time, watching the current BBC2 series analysing the New Labour era as told by its key players, some of that period’s big beasts now seem positively heavyweight compared to those who have succeeded them. One wonders how much worse things have to get before today’s gravitas-free intellectual lightweights are looked back on as political giants – and few voters these days would invest much faith in the sentiments of the 1997 New Labour Election theme song; who in 2021 could possibly believe things can only get better?

When the average IQs of most leading politicians were considerably higher than the same average today, the more nefarious amongst them were naturally dangerous characters to hold power; yet I’d much rather have a clever villain in charge than an idiot – the latter being characterised by its own unique dangers in the same way a blunt instrument is potentially more lethal than a sharp one. The events of the past couple of years have seen so much power ceded to the stupid that the world is far less safe than it would be if controlled by highly intelligent bastards. Not even this lot initially imagined they could get away with transplanting a totalitarian tool like lockdown from Communist China to Western Europe and across the global Anglosphere, yet they did it…and the people let them. When Jacindra Arden can shamelessly admit she’s deliberately creating an effective apartheid system in New Zealand based around vaccine status, and cannot resist flashing her equine incisors as her eyes glint at the prospect, it’s undeniable these fools can’t believe their luck.

Having realised how successful the politics of fear have worked in the absence of intelligence, the salesmen that terrified us into obedience during the pandemic have switched gear to the next alarmist crisis that will maintain the fear factor and keep them in power – Climate Change. It might appear that COP26 is brought to you in association with the BBC (on account of it being shoehorned into every f***ing programme being broadcast this week), but the Global Warming shindig in Glasgow is another example of these leaders’ idiocy. This idiocy blinds them into believing we actually can’t see through what they’re doing, that we somehow can’t discern the double standards as they fly into Scotland aboard gas-guzzling private jets that burn sinkholes in the Ozone Layer before proposing a series of expensive eco-policies that we have to live by whilst they continue jetting around the world unaffected. And, of course, they still insist we should wear masks mass-produced in China (a nation not in attendance at COP26, despite being responsible for a quarter of the emissions poisoning the planet); these masks will add considerably to the plastic pollution of the oceans, an issue they wouldn’t shut up about not so long ago and now tend not to mention.

There is so much hypocritical cant in the condescending proclamations of these idiots it often beggars belief. They broke lockdown and social distancing rules when everyone else faced fines for breaking them, and they remain exempt from a ‘green’ regime they’re determined to impose upon the rest of us whether we can afford it or not – an agenda outlined by leaders whose pit-stop visit to the UK sidesteps all the restrictions and limitations that apply to us when travelling from one country to another. Meanwhile, that prominent sufferer of Bonaparte-Bercow Syndrome, Lil’ Sadiq Khan of London Town, has recently extended the ‘Ultra Low Emission Zone’, a green measure aimed at drivers of older vehicles in the capital (i.e. basically everyone with a car bar those who can shell out a fortune for an electric one). This eco twist on the Congestion Charge places tolls upon the owners of pre-2005 petrol cars and pre-2015 diesel ones that could amount to £400 per month; yet again, genuine concerns about air pollution are exploited by penalising those who can least afford the sacrifice.

But, let’s be fair – it’s not just politicians who are at it. One of the biggest anchors on TV in recent years, former Channel 4 News frontman Jon Snow tweeted the other day that a tree which had blown over onto the railway line, thus disrupting his train journey to COP26, was yet one more indication of the climate catastrophe. Nothing to do with it being autumn, then? At the same time, Joanna Lumley thinks we should introduce eco-austerity to help the environment; she wants to bring back the Blitz Spirit via rationing. Yeah, great idea after all the privations the public have endured since Lockdown Mk I. Whatever planet these planks are on, one wonders if it’s really worth saving.

7 thoughts on “LESS THAN ZERO”