Road safety public information films from the 1960s are less heavy on the horror quota that terrified people into doing as they were told in the 70s; what one notices more than anything when watching monochrome pedestrians approach the edge of the kerb is the ironic emphasis on looking both ways for traffic when there actually isn’t any at all. Most of these shorts appear to have been shot on a Sunday morning judging by the number of cars passing by, and the absence of stationary vehicles lining the side of the pavement is a greater pointer to a different world than the sight of short pants or the black & white cinematography.

The gradual increase in car usage that characterised the end of wartime petrol rationing necessitated road safety being the most recurring topic of the early public information films; hand-in-hand with this growing awareness came improvements to official crossings for pedestrians to try to prevent them making their own way from one side of the road to the other and having to dodge traffic in the process. The first attempt at this was the Zebra crossing, which debuted in 1951, when there were two million registered cars on the roads. They were usually accompanied by Belisha beacons, which had been a regular street fixture since 1935, and the system reached its most notable worldwide exposure via the sleeve of ‘Abbey Road’.

The Highway Code specifies that motorists have to give way to pedestrians at a Zebra crossing, but some ignored the rule then as now; by just the first half of 1960, when registered car ownership had shot up to ten million, 533 pedestrians were either killed or injured at Zebra crossings, prompting a new solution by the Ministry of Transport. The ‘Panda crossing’ arrived in 1962 and was the first to have a pedestrian-level push-button system attached to the Belisha beacons, with instructions reading ‘Wait’ and then ‘Cross’; the design on the actual surface of the road was coloured the same as the Zebra crossings, but consisted of elongated triangles. The newcomer proved confusing for both pedestrians and motorists, and the unsatisfactory Panda crossing was phased out at the end of the 60s.

The successor to the Panda crossing, and maintaining the curious tradition of naming these street landmarks after animals, was the Pelican crossing. This first appeared in 1969 and whilst retaining the push-button aspect of the Panda, the Pelican introduced the familiar static red man and walking green man – though he always resembled a fairly non-binary individual, to be honest. In the 70s, this far more successful system was even promoted on a public information film by the cast of ‘Dad’s Army’ – a curious combination considering Captain Mainwaring and his platoon were mysteriously transplanted thirty years into the future without any of them seemingly noticing the fact.

Bar a few technological adjustments, when it was reborn as the ‘Puffin crossing’ in the 1990s, the Pelican remains the standard system of pedestrian crossing in British towns and cities. Tinkering with technology has also been responsible for a small handful of failed experiments, such as the brief use of a recorded voice by a celebrity that was a variation on the now-commonplace female voice announcing ‘Caution! Two-way traffic’ (presumably an aid to the visually impaired). I swear I’m not making this up, but around ten years ago Leeds City Council tried this out, and whose trusted vocal tones came over the speakers informing pedestrians the moment had arrived to cross the road? Erm…Jimmy Savile.

Throughout the 60s and 70s, children were the prime pedestrian demographic at which road safety programmes were aimed, as demonstrated with the proliferation of lollipop ladies at school crossings, as well as the Tufty Club, the Kerb Drill and the Green Cross Code – though the latter’s use of a be-quiffed old rocker clad in black (Alvin Stardust) or a muscleman in a cape and tights (Dave Prowse) probably wouldn’t be welcomed by kids in today’s considerably queasier climate.

Interestingly, the focus has now largely shifted to the other end of the scale; a study commissioned five years ago revealed that elderly pedestrians were struggling to keep up with the brisk walking pace of the green man. 76% of men and 85% of women of pensionable age were failing to adhere to the recommended international pace of 4ft per second; the findings of the 2012 report stated the average walking pace for over-65s is 3ft per second for a man and 2.6ft per second for a woman; it takes between four and seven seconds before the green man begins flashing (naughty boy), cutting it a bit fine for the plodding pensioner.

The National Institute for Health and Care Excellence (NICE) are recommending the period for crossing be extended a little, perhaps taking the more plentiful numbers of OAPs into account these days. Zebra crossings present even more of a challenge in that motorists who fail to stop for pedestrians or exercise their impatience by beeping their horns only face a £100 fine and the loss of three licence penalty points; some countries impose a fine of around £2,000. The rules do change slightly if a motorist fails to stop at a Zebra that is a school crossing point, however, with a potential fine of £1,000.

NICE also expressed concern at the pavement furniture that can be a potential problem for either elderly or disabled pedestrians, such as the awful eyesore of the bin parade. Maybe they should have gone a little further and included the infuriatingly annoying charity chuggers that make a habit of invading one’s personal space on the street. They could easily be replaced by the return of the old-school charity boxes featuring admittedly creepy (to a child, anyway) actual-size fibreglass models of disabled children or injured animals that were a regular sight of our streets until the Spastics Society was reborn as Scope and decided they were old hat. And on that subject… 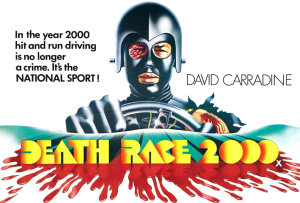 Watching any movie or TV drama from forty-odd years ago in which there is a location scene shot in an urban environment, the first thought that nearly always strikes the viewer is the paucity of vehicles on the road. Of course, it is a sensible and time-honoured practice for film crews to shoot outdoors at the crack of dawn, usually during the summer months when the sun rises especially early, and in some cases (depending on the budget) a road is closed off to prevent pedestrians or motorists wandering into focus and unintentionally interfering with the production. But even if these factors are taken into consideration, there is the undoubted evidence of streets unencumbered by parked cars outside private residences. If one ever wants proof of how car ownership has increased since the 1970s, one only has to compare the average street decor in terms of vehicles then to the same kind of location today, whereby single file traffic is often the only way of navigating one’s way through a road narrowed by nose-to-tail stationary cars on both sides.

Regardless of the long-running PR campaigns dissuading people from driving – whether from the green angle, encouraging the use of bicycles, or from the congestion angle, encouraging the use of public transport – a car of one’s own remains a must-have accessory for the majority. At one time, particularly when women had clearly defined roles within a marriage, one car per family would suffice, and was generally the husband’s toy; then it became commonplace for both spouses to have a car each; that children generally fly the nest later these days, and that economic factors mean many of them return after a university sojourn, has resulted in a third car parked outside the house in many cases. I’m sure garages for hire must still exist, though it would seem few use them anymore.

Figures published at the beginning of this year found that the number of cars on the country’s roads rose by almost 600,000 in the space of twelve months, with 25.8 million licensed cars in the third quarter of 2015. The year before, the figure had been 25.2 million. Affluent south-east England (which can claim 561 cars for every 1,000 people) saw the largest regional increase, with 373,200 more cars over five years, and the British motor industry, for so many decades one of our most under-performing, reported 2.63 million new cars had been produced in 2015, a 6.3% rise on 2014 as production reached a seven-year high.

As ever, a greater demand in goods brings down their price, which is indisputable when one considers there were 21 million cars on British roads in 1995 and twenty years later this had risen to 31 million; had the cost of a car stood still, such an increase would have been impossible. Statistics from the Department of Transport say there is now at least one car for every two people in five out of nine English regions.

The construction of the M62 between Yorkshire and Lancashire in the late 60s, the aim of which had been (like most early motorways) to alleviate traffic on overcrowded old A and B roads and to cut short long journeys, has ultimately been a failure simply because the level of car ownership at the time of its opening in the early 70s was a fraction of what it is now. The men who planned it evidently didn’t foresee a future in which the great liberator of the trans-Pennine motorist would end up as one of the country’s most congested roads. An average flow of 70,000 a day in just 1999 had increased to 100,000 by 2006. The M62 is naturally used by HGV lorries and other commercial traffic, so the blame on the increase cannot be laid solely at the private motorist; but without the substantial growth in car ownership over the last forty years there’s no question the congestion that afflicts the likes of the M62 would be nowhere near as bad as it is today.

In the midst of the growth of car ownership, cuts to public transport have undermined it as an alternative. Over the last six years, the use of buses has fallen across two-thirds of English council areas; as with the railways, rising prices and unreliable services have seen numbers diminish, with a drop from 5.7 to 4.1 million journeys. Out of 89 transport authority areas, only 29 reported a rise in passengers in the most recent survey. Deregulation of bus services has had an impact on both quality of service and passenger numbers, not to mention the cost of travelling by bus, though it has to be noted that there are (as the Radio Times used to say) regional variations where these statistics are concerned.

Whereas Redcar and Cleveland saw 27% fewer bus journeys made in 2015 in comparison to 2010, West Berkshire saw a 44% rise during the same period. Perhaps it’s telling that the West Midlands and Black Country have experienced a drop from 294 million to 275 million journeys in the last five years whilst fares have been hiked up from £1.80 to £2.30, even as diesel prices have fallen to a six-year low. Meanwhile, the Beeching Axe that decimated the rail network in the mid-60s is something that particular form of public transport has never really recovered from in presenting itself as a viable alternative to the internal combustion engine; privatisation of the industry has also contributed to its continuing disappointment when it could, and should, be so much better than it is.

A cursory excursion around the outskirts of most major towns and cities highlights the concessions that have been made to the motorist, with many neighbourhoods that once comprised thriving communities having being bulldozed into mini-motorways oozing bewildering mazes of winding roads to accommodate the nonstop flow of traffic. It can have the effect of making a passenger – or driver (though I fall into the former category) – feel as though he or she is trapped in a 70s JG Ballard novel, a dystopian concrete racetrack with no beginning or end, merely an eternal middle from which there is no escape. But, hey, this is the age in which we live – and drive; and drive; and drive.