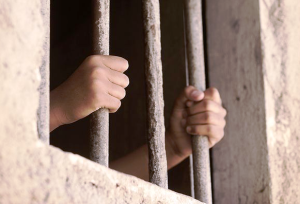 Anyone who has seen either the original 1977 BBC version of Alan Clarke’s ‘Scum’ or its even more graphic cinematic interpretation from a couple of years later will certainly be aware of just how brutal a system the old Borstal could be. Yes, the film was a work of fiction, though few doubt it was a pretty accurate dramatisation of conditions in such institutions at the time the initial play was penned by Roy Minton. With the first ‘Play for Today’ incarnation deemed too violent to be transmitted, director Clarke took the same route as Dennis Potter when his own ‘Brimstone and Treacle’ had been banned from BBC screens a year earlier: he restaged it as a movie. By the time it was released the Borstal system was more or less defunct, replaced by detention and youth custody centres. The name Borstal continued to linger as colloquial shorthand for such locations, however.

Since the Criminal Justice Act 1982, the ‘short, sharp shock’ eye-for-an-eye approach to punishing young offenders not yet old enough for proper prison has had to compete with demands for a more humane attitude based around constructive rehabilitation and an increasing awareness of the social environments that have bred criminality. It’s something of a conundrum, balancing the need to punish and make residents aware they’ve done wrong, without resorting to the excessively harsh disciplinary regime of the old Borstal model. If the system tips too far in one direction, exaggerated comparisons of Young Offenders Institutions with luxury hotels are regularly aired in right-wing tabloids as an example that whichever party happens to be running the country is too ‘soft’ on crime.

What does society do with children who don’t adhere to the rules and regulations dictated by that society or simply don’t fit into it? Those who end up being sent to a Young Offenders Institution as a last resort are presupposed to have reached an age where they can distinguish between right and wrong; those suffering from severe mental disabilities are similarly exiled from the frontline of day-to-day living, placed in care units that are both intended to attend to their special needs and to spare society from their uninhibited behaviour. The latter children are deemed to be blameless; they know not what they do. The former were traditionally regarded as wicked, not even able to boast the excuse of lunacy; therefore, they had to have the badness drilled out of them by Borstal.

A greater acknowledgement of the conditions that give rise to criminality amongst the young – social depravation as well as abuse of a physical, sexual, and psychological nature – have permeated thinking when it comes to what to do with such children in the last few decades. Attempting to break the cycle of offending before it becomes a habit is a tough task if the children released back into society then return to the same environments that bred them; moreover, the importance of not modelling the establishments on gaols – and therefore them not merely being ‘prep-school prisons’ – means it’s a difficult path to traverse. There is also the fact that some of the children have committed extremely serious crimes and are unarguably a danger to both the children around them and to the outside world.

Today the High Court ruled that a 16-year-old inmate of Feltham Young Offenders Institution in south-west London had his human rights breached by being kept in solitary confinement for upwards of 22 hours a day. Denied interaction with other residents and the access to education to which he is legally entitled, the boy – who apparently suffers from serious mental health problems – was detained at Feltham last December and is due for release this month; the cause of his detainment has not been revealed. In response to the ruling, the Ministry of Justice has declared that ‘proportionate and justified segregation’ is necessary in some extreme cases, though Feltham itself has been previously criticised for its treatment of residents; HM Inspectorate of Prisons recently claimed 40% of boys were locked in their cells throughout the school day whilst 30% had only a couple of hours a day in which they were let out of them.

Unless one is an ex-inmate, only those who have either family members (or the family members of friends) encased in such institutions can have any inside knowledge of the way in which they operate. They remain something of a secret society within society. If a Young Offenders Institution or a care unit containing mentally-handicapped children is to receive a prearranged visit from inspectors, the elements that cause concern for parents are discreetly swept under the carpet for the duration. It’s not too dissimilar to when my mother was a school dinner-lady; she once told me when inspectors were due the headmaster would ensure the most troublesome pupils were given a day-off in order not to give the inspectors the impression the school was a hotbed of antisocial anarchy. Had the inspectors simply turned up without warning, the airbrushed impression of the school they received would have been replaced by a far truer picture of the establishment.

Having a friend whose mentally-handicapped child is resident in a care unit, I’ve received several stories of the realities of such an institution, ones that rarely (if ever) leak out to the wider world and ones that certainly don’t fit the image anyone without an emotional investment in them might have of how they function. Avoidable accidents are commonplace, usually due to members of staff whose excess pounds prevent them from being as nimble on their feet as they should be when looking after children with an abundance of energy. When food budgets are often spent on meals the said members of staff can enjoy at the expense of the more problematic residents, who may not be willing (or able) to consume them, one has to question who is actually benefitting from the vast amounts of money diverted into these institutions.

Some of the stories that have emerged from the likes of Feltham bear an uncomfortable resemblance to scenes from ‘Scum’, whereas some of the stories I’ve been told of those institutions reserved for the mentally-handicapped often recall the equally nightmarish fictional portrayal of the old asylums in another disturbing play from the turn of the 80s, ‘Walter’. This whole subject is one of the most challenging society has to deal with, and one cannot but sometimes come away from it concluding that society isn’t dealing with it very well at all.