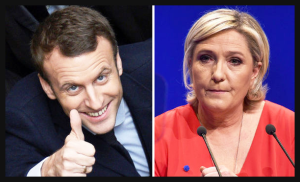 I would imagine the sigh of relief from Brussels can be detected in Paris tonight. As with the recent failure of Geert Wilders to claim victory in the Netherlands, Marine Le Pen’s threat to win the French Presidency has been vanquished. Of course, over in EU Central, the potential panic wasn’t based on her far-right rhetoric and how it might impact upon those within France who don’t fall into her favoured demographic, but the explicit anti-EU bandwagon she’d attached herself to – a common thread amongst Europe’s contemporary far-right parties. In the wake of Brexit, the fear that the other leading Western European nations might follow suit and bring the whole bureaucratic house of cards crashing down appears to have been eased; but how long for, one wonders.

Jean-Claude Juncker’s petulant jibe at how the English language is losing its relevance on the continent a couple of days ago for some epitomised the arrogance of the unelected passengers on the Brussels gravy-train, whereas others might regard it as a tit-for-tat response to the equally combative approach of the right in both Westminster and on Fleet Street. It was almost reminiscent of when the host of the Eurovision Song Contest would make his or her announcements to the audience in French before being forced to repeat them in English – just so viewers knew which language took precedence. European harmony is certainly in short supply at the moment, but Juncker and his colleagues can take solace from the fact that, of the three key General Elections taking place in Europe this year, at least one of them has gone their way. And it’d be a major upset if the Germans don’t do likewise.

It’s probably true to say Britain never truly embraced the European project with the same verve as our continental neighbours; we were the cautious bass-player in the early Punk band who was the last member of the group to cut his hair and stop wearing flares – and even then, the barber and the boutique were approached with reluctance. If any member state was eventually going to bail out, it was bound to be Blighty; perhaps the real surprise is that it took so long before it happened, not that it actually did happen. For France to reach the same conclusion, however, would have been unthinkable until very recently. Then again, France’s all-encompassing enthusiasm for the European Union has been whittled away by similar factors that motivated some to vote Leave here last year.

Considering France has suffered more than most from Islamic terrorism in the last couple of years, the issue of immigration has unsurprisingly registered highly in this Presidential Election; Marine Le Pen, like Farage and Trump before her, has tapped into the neglected concerns of natives who, already victims of the post-2008 economic downturn, have naturally laid the blame at the door of globalisation and freedom-of-movement immigration. Le Pen has exploited this for her own gain, as any canny politician would, but it’s easily done when such a large demographic has been consistently ignored by the mainstream parties for so long. That neither Le Pen nor Macron belongs to a mainstream party speaks volumes as to this dissatisfaction with the political process.

Marine Le Pen has portrayed herself as a figure outside of the establishment, though it’s not as though she rose from humble beginnings and has entered the political arena overnight; she’s very much a member of an establishment, just not the establishment. However, she was able to play the outsider card on account of her opponent. Standing against Emmanuel Macron – former investment banker, ex-member of Hollande’s cabinet, liberal centrist and (crucially) pro-EU – the gift of Macron to Le Pen masks Macron’s own independence from the political establishment, leaving the Socialist Party and forming his own party, En Marche! By the way (just in case you were wondering), the exclamation mark is part of the party’s name.

Macron appears to be a rather bland professional politician in the Blair mould, espousing the kind of centrist rhetoric that’s certainly been discredited on this side of the Channel; in fact, the only thing I can see remotely interesting about him – other than (at 39) he’ll be France’s youngest-ever President – is that he married his former teacher, some twenty-odd years his senior, thus fulfilling the fantasies of many an adolescent boy. Were he a Brit and their positions were reversed, i.e. he’d been the former tutor who’d married a pupil, he could probably expect a knock on the door from Inspector Knacker and the Historical Fishing Party Squad; but they’re French, of course, and the French don’t get so hot under the collar about such things.

So, Le Pen may have lost this time round, but the challenge facing Macron, regardless of the blessing he’ll receive from Brussels, is to try to heal some of the gaping wounds French politicians have allowed to fester for a long time. If he doesn’t, he’ll find his opponent in 2017 (who is hardly the sort to disappear from the political scene with a whimper due to one defeat) will be more than ready to take him on again in 2022. The French electorate have resoundingly rejected the two dominant parties of the last half-century in this Presidential Election, so past loyalties can no longer be relied upon. Macron has quite a task on his hands, and if he isn’t capable of getting the job done, both he and his countrymen will suffer the consequences five years from now.

As for home soil, we’ve nothing to be smug about…