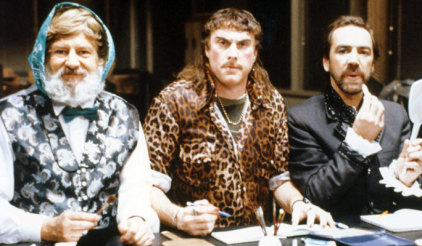 The senile old man, the young idiot, and the pompous fool – that was the template Jimmy Perry confessed he seized upon when putting together the genesis of ‘Dad’s Army’ in his head over 50 years ago. He’d drawn inspiration from an old Will Hay movie, the kind that was once a staple diet of Saturday afternoon cinematic interludes on BBC2, and the kind that has now sadly been largely forgotten. Will Hay was one of Britain’s most popular comic actors between the wars and his 1937 film, ‘Oh! Mr Porter’, set in a rural railway station, established the three-way dynamic of the archetypes mentioned in the opening sentence that proved so influential on the formulation of the nation’s favourite TV sitcom. Hay had played the pompous fool that could be seen as a prototype for Arthur Lowe’s Captain Mainwaring, and it was the amusing interaction between his character and his old and young subordinates respectively that has continued to echo down the years as comedy alchemy, perhaps reaching its comic peak with ‘Father Ted’ in the 1990s.

However, five years before the priests of Craggy Island debuted on the one-time risk-taking innovator known as Channel 4 in 1995, the same station had aired a sitcom that utilised the same basic formula of the archetypal trio in a completely different (albeit similarly restrictive) setting – and one that remained far more under the radar than Ted, Dougal and Jack. ‘Nightingales’ first appeared at the beginning of 1990, hidden away well after the watershed, which was apt scheduling for a series based around the activities of three nocturnal security guards stationed at a dreary city centre office block. Entirely studio-based, ‘Nightingales’ never saw daylight and was perhaps the last TV sitcom to have the look and feel of a stage-play, eschewing location filming and relying instead upon the inventively funny storylines, the well-drawn characters, and the comic charisma of the small cast to deliver the laughs in the same way ‘Steptoe and Son’ often did in the 60s and 70s. As with Galton & Simpson’s creation, the simple premise of characters trapped in a depressive, claustrophobic environment with no escape is a classic trope of the best British sitcoms, and ‘Nightingales’ is no exception.

The titular head of the ‘Nightingales’ trio was the old man character known only as ‘Sarge’; he was played by ‘Z Cars’ veteran and acclaimed dramatic actor James Ellis. The young idiot character was ‘Ding Dong’ Bell, played by David Threlfall, who later went on to achieve cult status as Frank Gallagher in ‘Shameless’; and the pompous fool was Carter, played by Robert Lindsay, whose sitcom CV stretched back to the 70s with ‘Citizen Smith’. Although there were a handful of minor characters that appeared periodically, the main focus of the series was this three-headed acting powerhouse. Given the soul-destroying boredom of the setting, it was perhaps no surprise that the series routinely ventured into the surreal and the strange, almost as though it was accessing the imaginations of the characters by blurring the lines between the uninspired reality of such a workplace and the fantasy reality its workforce must regularly inhabit simply to endure working there.

James Ellis’s Sarge is a passive, pliable and rather naive avuncular figure, the kind that sees the good in everyone and consciously evokes ‘Dixon of Dock Green’ characteristics when delivering the occasional end-of-show summary, even concluding with an ‘evenin’ all’; it seems too coincidental that the writers didn’t play upon this even further once the former Sgt Bert Lynch from rival cop drama ‘Z Cars’ had been cast in the part. David Threlfall’s Ding Dong is an aggressively childish, thuggish dimwit whose stupidity forms the basis of numerous gags throughout the series, and though he enjoys winding-up and mocking the pretensions of his colleague Carter, Ding Dong simultaneously admires Robert Lindsay’s character in the same way a relentlessly teasing little brother sees in his elder sibling everything he himself secretly wishes he could be. Carter has echoes of Hancock or Harold Steptoe in that he evidently regards himself as far superior to both his surroundings and those surrounding him, forever hankering after a higher aesthetic existence – ‘I wonder what Harold Pinter’s doing tonight?’ is the kind of yearning question he has a habit of posing without receiving a reply. At the same time, his awareness of his actual limitations is exposed whenever promotion within the security business presents itself to him. In fact, Carter’s real dream job is to be a security guard at Heathrow Airport, which he regards as the pinnacle of the profession.

Although it has the conventional look of all the old sitcoms played before a live audience that would be rendered antiquated overnight once the likes of ‘The Royle Family’ and ‘The Office’ changed the game, the magic-realism elements of ‘Nightingales’ don’t take long to show themselves. In the very first episode, a medical student joins the team for one night only, failing to last the course on account of it being a full moon and him being a werewolf. He returns a few episodes later to perform a heart bypass operation on Sarge in the workplace, with Carter and Ding Dong vying for the honour of being able to pass instruments to the amateur surgeon during the procedure. The surreal boat is pushed out even further in an episode in which another addition to the workforce turns out to be a gorilla who wins over the initially hostile team to the point whereby they christen him Terence and are crestfallen when he leaves to accept a position as a security guard at Heathrow.

The Heathrow factor resurfaces again in an episode that sees Carter and Ding Dong competing against each other in the hope of winning a prestigious post at the airport; in order to scoop the prize, they first have to undergo a written examination of the kind we all endured at school (which Carter smugly sails through), followed by the building of a dry stone wall, which the far more hands-on Ding Dong has no problem with. The writing and staging of a one-act play completes the test – and all three sections of the exam are completed in one evening. My own personal favourite episode is one in which Sarge and Carter discover Ding Dong has been up in court for having sex with a horse; a shrink visits the premises as part of his psychiatric assessment and proceeds to hypnotise all three members of the workforce, uncovering several buried secrets along the way. Another classic is an episode in which Peter Vaughan guest stars as a sadistic inspector whose persona is so Captain Bligh-like that the story mutates into a pastiche of ‘Mutiny on the Bounty’. If that sounds weird, by the time the episode comes around such flights of fancy are well-established.

In the best sitcom tradition, there’s even a Christmas-themed episode. A pregnant woman by the name of Mary turns up and begs to have her baby on the premises; despite signing a contract drawn up by the suspicious team to swear she’s not an allegory, she then proceeds to give birth to a succession of consumer goods. It’s quite unlike any other Christmas episode of any other sitcom you’ve ever seen. I did actually catch a small handful of ‘Nightingales’ episodes in the early 90s (it only ran for two series), and though I found it funny I’d all-but forgotten about it until a friend bought me it on DVD three or four years back. Not having any idea of my past acquaintance with the series, she figured it might be something I’d like. Revisiting it 30 years after the event, I was pleasantly surprised at how much funnier and innovative it seemed than first time round. I now place it high in my own personal list of favourite sitcoms, even though so few are aware of it. If you’ve never seen it, check it out and join a very small albeit passionate fan-club for an overlooked and underrated gem capable of brightening-up the kind of nights that can make anyone feel as trapped as a nocturnal security guard in a dreary city centre office block.