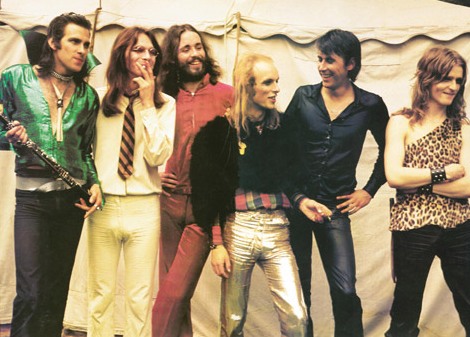 When it comes to pop music, familiarity may not necessarily breed contempt, but repetition can block the ears to the sensation that comes with hearing something for the first time; it’s almost impossible to recapture that sensation unless enough years go by in which the ears are spared further exposure to it – and tuning in to the predictable playlists of ‘oldies’ stations is something of a hindrance to the process. One doesn’t necessarily have to have been around at the time of the record’s release to have experienced said sensation, though perhaps to fully appreciate just how groundbreaking a piece of music was in its day, it probably helps if you haven’t already heard everything that came after it. Anyway, as we continue along the path of years being characterised by how many landmark anniversaries they contain rather than whatever the current excuse for pop music happens to be doing when nobody’s listening, this year contains the usual multitude of significant dates. A record that might easily be overlooked from the anniversary list takes us back half-a-century, which is difficult to comprehend when the track in question still sounds like the future, albeit a future we never reached. I’m talking about ‘Virginia Plain’ by Roxy Music.

Released 50 years ago this month, the debut single by the intriguing Art Rock band with the unique potential to appeal to viewers of ‘Top of the Pops’ as much as ‘The Old Grey Whistle Test’ followed hot on the heels of Roxy Music’s first (eponymous) LP, which was climbing up to its peak position of No.10 on the albums chart. Throughout 1972, the band had been steadily building a reputation as ‘one to watch’, cannily supporting breakthrough man-of-the-moment David Bowie at the prestigious Rainbow Theatre and catching the eyes and ears of a music press eager for the Next Big Thing. The divisions between Rock and Pop were becoming wider in the early 70s, with huge acts like Led Zeppelin and Pink Floyd flourishing on album sales alone, not even needing the regular stimulus of a hit single to keep them in the public eye as bands in the 60s had; in the singles chart, the likes of Gary Glitter, Sweet, Slade and T. Rex were cleaning up as a consequence, and it seemed as though Glam was for the teenyboppers whilst Prog was reserved for the students – one was made for the affordable 45, the other was made for the expensive LP.

However, with the release of his ‘Ziggy Stardust’ album (and its accompanying hit single, ‘Starman’), David Bowie paved the way for a strain of Glam that elevated the genre above the primal stomp and gave it a few musical and lyrical A-levels in the process. Roxy Music were able to capitalise on this climate, producing esoteric and eclectic sounds infused with pure pop melodies and presenting the package in the kind of kitsch, exotic dress-sense that was anathema to the dominant denim-clad Hard Rock brigade. But Bryan Ferry, the band’s founder member and frontman, had come up through the art school route with an appreciation of the visual and recognition of its importance in selling a band brand. The gatefold sleeve of the band’s debut album featured glamorous Ossie Clark catwalk model Kari-Ann Muller, whilst the individual portraits of the band inside complemented the cover, especially those of Ferry himself, synthesizer scholar Brian Eno and woodwind wizard Andy McKay.

As was fairly common at the time, no tracks were lifted from the debut LP as singles, even though several of them would have performed well if they had, encapsulating as they did Roxy’s unique blend of all pop that had gone before and all that was to come. With Bryan Ferry’s distinctive vocal delivery drawing on pre-Rock ‘n’ Roll stylists such as the crooners of the 40s & 50s as well as the quintessential English camp of Noel Coward, it was plain here was a band breaking with the recent past by borrowing from the distant past; but the inclusion of Eno’s experimental soundscapes looked forward, whilst Phil Manzanera’s guitar riffs and Andy McKay’s frenetic saxophone kept the band just about moored in 1972. It was an original and exhilarating mix that, coupled with Roxy’s louche, decadent twist on Glam fashion, made them stand out like a sore sequin. The fact they were prepared to launch an assault on the singles chart reflected Bryan Ferry’s passion for the three-minute pop song, and when it eventually appeared Roxy’s debut 45 was destined to be no run-of-the-mill hit. It had to distil everything that had made the LP such a vibrant and exciting listen into a short enough timespan to earn the band the coveted ‘Top of the Pops’ appearance. And Roxy rose to the challenge in style.

A TOTP audience that was still recovering from the seismic shock of Bowie’s ‘Starman’ performance barely a month before was ill-prepared for the debut of Roxy Music on the show, which was broadcast on 24 August. Phil Manzanera’s ‘fly’ sunglasses, Brian Eno’s glistening gloves, drummer Paul Thompson dressed as a circus strongman in ‘Clockwork Orange’ mascara, Andy McKay playing the oboe with his hair tied back as though a Samurai warrior, bassist Rik Kenton passing for a gawky schoolboy, and a surreally suave Bryan Ferry in glittering eye-shadow and a sparkly jacket designed by Anthony Price. They resembled regal aliens beamed down from an early 70s idea of what pop stars in the Year 2000 would look like. And if the presentation of ‘Virginia Plain’ was a treat for the eyes, the record itself was a blistering banquet of sonic delights.

Subverting the standard formula of the pop single, ‘Virginia Plain’ fades in and ends abruptly rather than the other way round; but it’s also a song without a chorus, a song whose title only surfaces as the very last line. The first verse follows what sounds like an autobiography of the band struggling to get a recording deal, yet ‘We’ve been around a long time’ wasn’t necessarily the case, as Roxy didn’t spend years paying their dues on the college circuit; they were far more ambitious and went for the music business jugular from the off. As the song goes on, Ferry’s lyrics expand to encompass the kind of jet-set lifestyle the singer hopes success will bring – ‘Flavours of the mountain streamline/midnight blue casino floors/Dance the cha-cha through till sunrise/opens up exclusive doors’; this continues to the final verse – ‘Far beyond the pale horizon/some place near the desert strand/Where my Studebaker takes me/that’s where I’ll make my stand’. In the song that introduced the majority of the record-buying public to Roxy Music, Bryan Ferry sets his stall out and plots his future for all to see.

Whereas in later years, the prefix ‘Bryan Ferry and…’ became commonplace – largely due both to the public’s failure to distinguish between Roxy Music and Ferry’s concurrent solo career and Ferry’s eventual dominance of the band – early Roxy is very much a team effort. ‘Remake/Remodel’, the opening track on their debut album, contains tongue-in-cheek passages where each member of the band has two bars to showcase their individual instrumental skills; and ‘Virginia Plain’ offers similar opportunities to demonstrate they’re far from a one-man band, especially the instrumental section building up to the final verse, where Phil Manzanera and Brian Eno both shine. There’s no audible kitchen sink in ‘Virginia Plain’, but it sounds like pretty much everything else is present. 50 years old and it remains one of the great debut singles, probably because not only does it not sound like anything else from 1972, it still doesn’t sound like anything else you’ve ever heard.

The single served as the launch-pad for twelve months in which Roxy Music were the most innovative and inventive band in Britain; their second album, ‘For Your Pleasure’, was released in March 1973 and is arguably the band’s finest LP, with ‘Do The Strand’, ‘The Bogus Man’ and ‘In Every Dream Home, A Heartache’ all masterpieces of Roxy’s sublime blend of pop and the avant-garde. Then the strain of containing two such gigantic artistic egos as Ferry and Eno finally provoked a split in the ranks and the latter left the fold; although there were innumerable great songs to follow, Roxy Music were never quite the same again. And no other hit quite matched the superlative originality of their first – half a bloody century ago.