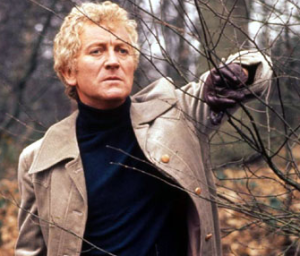 Say the name ‘Van der Valk’ to anyone of a certain age and the chances are they’ll be provoked into whistling – or at least humming – the theme tune. ‘Eye Level’ by the Simon Park Orchestra represented one of those occasional anomalies in the UK charts of the 1970s, when a freak smash zoomed past the usual suspects and shot to the top spot when nobody was looking; in the case of the theme from one of ITV’s hit dramas of the era, both Slade and The Sweet were kept from the No.1 position courtesy of its unexpected success, which was no mean feat in the frenzied Glam scene of 1973. Simultaneously bombastic and sweetly melodic, ‘Eye Level’ remains an infectious earworm that lacks the testosterone-driven machismo of the cop show themes that opened the likes of ‘The Sweeney’ or ‘The Professionals’. In its own way, however, it works because it mirrors the somewhat erudite lead character of the series as well as the picturesque European city that Commissaris Piet Van der Valk polices – Amsterdam.

Based upon the 60s novels written by Nicolas Freeling, the eponymous Dutch detective was brought to the small screen by Thames in 1972. The language barrier was overcome by having every character speak English whilst implying they’re speaking in their native tongue to each other, as had become second nature when Nazis conversed in the war movies of the period – or the Parisians in that earlier UK-produced detective series based in a European city, ‘Maigret’. ‘Van der Valk’ had an advantage over competing shows of the time by virtue of its novel setting – though the videotaped studio scenes were recorded in London, the location filming was all done in Amsterdam; the programme therefore immediately stood out, for in an era that had yet to see foreign holidays become the norm for the majority of Brits, a city such as Amsterdam retained an air of the unfamiliar. It was good timing, too; from the dominance and brilliance of Ajax and Feyenoord on the football field to the bonkers Prog Rock innnovation of Focus, the Dutch were making quite a pop cultural mark in the early 70s.

The actor playing Van der Valk had a face that rang more bells than his name when he landed the part. Barry Foster had gained a reputation for playing some fairly unpleasant characters in British films of the late 60s and into the 70s – a boorish bully in ‘The Family Way’, a ruthless Republican paramilitary in ‘Ryan’s Daughter’, and most memorably of all, an arrogant rapist in Hitchcock’s blackly comic ‘Frenzy’. He was an interesting choice to portray a good guy, but the character of Van der Valk combined an occasionally gruff exterior with some intriguing hidden depths. The lead characters in the most popular US police/detective shows of the 70s generally had a visual gimmick that distinguished them from one another – Columbo’s dirty mac, Ironside’s wheelchair, Kojak’s bald head, and so on. Their British equivalents tended to be more subtle in what made them distinctive, and with regards to Van der Valk it was mainly down to the man he was outside of the job.

When at home, the Commissaris liked to spend his evenings listening to classical music and enjoying what used to bear the exotic label of haute cuisine; he could indulge in the latter due to the fact that he was a happily married man – and married to an exceptional cook. That Van der Valk wasn’t a divorcee or a perpetual bachelor makes him a different proposition from many TV cops that followed; he and his French wife Arlette are not only very much in love, but intellectual equals. Despite initially having a sidekick in the shape of Michael Latimer’s Johnny Kroon (who sounded as though he should’ve been playing alongside Johan Cruyff), Van der Valk never really had a permanent Carter to his Regan, and Mrs Van der Valk is his one true confidant, the person he discusses cases with over dinner and who often helps him solve them. Their marriage even survives Arlette being played by three different actresses over the course of the series’ lengthy timespan.

One of Amsterdam’s more infamous industries doesn’t figure as prominently as one might expect in the series; the notorious ladies in the windows only feature in a solitary episode, and many of the crimes Van der Valk deals with could happen anywhere. Perhaps anticipating the later ‘thinking man’s copper’ trend for loners rather than team players, ‘Van der Valk’ is not an ensemble piece and there’s a notable absence of screeching tyres and shoot-outs, at least in the first two series. For some strange reason, there was a four-year gap between series two and series three, and when ‘Van der Valk’ returned in 1977 it was produced by Thames’ on-location company, Euston Films. This meant the entire show could now be shot in Amsterdam, but it also required a slight increase in the kind of action Euston specialised in. When series three ended, the programme was then mothballed again, but this time for the best part of 13 years.

By now you’ll have worked out the Dutch detective is my current vintage viewing, but though I recall the earlier series from childhood, I’d never seen the early 90s revival until reaching it on the box-set. Happily, the theme tune and the leading man are intact, but there are several changes to the formula. In tune with the ‘Inspector Morse’-style format of the period, these episodes are movie-length and though the storylines are still engaging and the guest actors impressive, the beginnings of that contemporary curse where TV drama is concerned – intrusive incidental music – does get in the way somewhat. The original series barely had any incidental music at all, but the 90s revival is swamped in it from the off, unnecessarily melodramatic and also badly dated by virtue of it being the awful synth strings of the time.

One aspect of the 1991/92 series that occurred to me when watching has nothing to do with the show itself, but is more of a cultural factor: I couldn’t help but conclude how much nicer young women looked in the early 90s, something I’d never considered until I saw the evidence from a fresh perspective. There are no fake tans, no piercings, no tattoos, and the cosmetics on the countenances are fairly minimal; they look more naturally beautiful than their 21st century equivalents, and whilst I’m no position to judge how young women should or shouldn’t present themselves when facing the world, it was an observation I thought worthy of noting in the context of then and now. It’s often only when one is unexpectedly confronted by the forgotten fashions of a past one lived through that unavoidable comparisons are made.

Barry Foster passed away at the age of 70 in 2002. Outside of ‘Van der Valk’, he seemed to be one of those actors who was rarely out of work, though his portrayal of TV’s most famous Dutch detective understandably overshadows the rest of his substantial CV; the lead role in a successful series tends to be the one the viewing public will always associate an actor with. ‘Van der Valk’ itself was apparently revived anew earlier this year, with Marc Warren stepping into the Commissaris’ shoes. I didn’t catch it, but by all accounts it bore little connection to the original series bar the name; it didn’t even exhume ‘Eye Level’, which is pretty unforgivable. Of course, 2020 bears little connection to most years, never mind the ones in which ‘Van der Valk’ aired first time round, with or without that theme tune. But spending evenings turning back the clock is nevertheless one of 2020’s defining characteristics for your humble narrator. And in that respect, the series is as relevant to now as it was to then.